The Silver Kingdoms, or the Epoch Kingdoms, are an ancient coalition of nations on the planet of Roshar, dating back to the era of the Knights Radiant.[1][2]

The era when the Silver Kingdoms existed is called the Silver Kingdom Epoch, or the Heraldic Epochs. There were ten kingdoms, each of which had a perfectly palindromic name - a reflection of the holiness of symmetry that can be found in Vorinism. However, it's more than likely that those names predate the rise of Vorin religion.[1]

Each country had its own purpose within the war against the Voidbringers, likely preordained by the Heralds - for example, Alethela was the "protector state", set up to preserve the arts of war and train people in case of a Desolation.[1] All ten states had their own Oathgates within their capital cities, connecting them to the Knight Radiant tower city of Urithiru.[3] Within Urithiru, each of the states is said to have had a throne set up for its ruler.[4]

In the modern era, most of the Silver Kingdoms no longer exist, with Shin Kak Nish (now called Shinovar) and Aimia being the only exceptions (although the Scouring of Aimia makes its current status unclear). Most, like Makabakam, have splintered into a number of smaller states, while Natanatan has fallen completely, having been reduced to a small number of stateless settlements and a lone city-state of New Natanan. However, the modern cultural, ethnic and linguistic make-up of Roshar still reflects that of those ancient kingdoms, and many current borders lay along similar lines to those of old.[5]

The Silver Kingdoms were[2]: 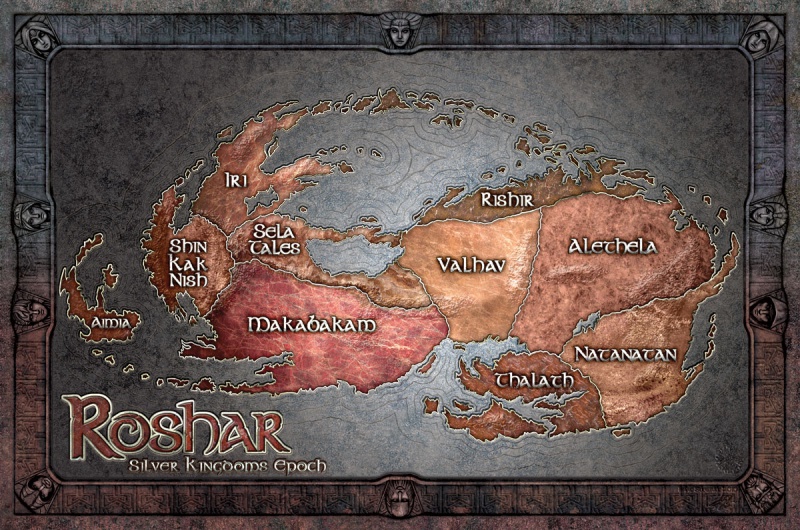 A map of the Silver Kingdoms by Isaac Stewart

This article is still missing information. Please help The Coppermind by expanding it.
Retrieved from "https://coppermind.net/wiki/?title=Silver_Kingdoms&oldid=124476"
Categories: