“"Storm you!" Lopen made a double obscene gesture toward the sky...Rua joined him, making the same gesture, then grew two extra arms to give it more weight. ”

Rua is an Honorspren on Roshar. He bonded Lopen and they together belong to Bridge Four.[1]

Rua appears to Lopen as a ribbon of light, a young boy of nine or ten years and as a young man. Lopen calls him Naco. He likes to play hide-and-seek with Lopen, whose carefree attitude meshes well with the spren. He is mischievous like a windspren. He appears to be incapable of speech.[1]

As Honorspren, bonding him makes Lopen a Knight Radiant of the Order of Windrunners.[1] 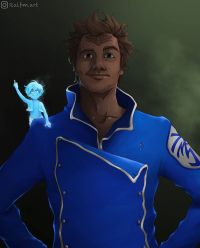 by Ralf Melevo
Rua with Lopen

Rua seems to have bonded Lopen during the Battle of Thaylen Field. Lopen said the first oath but did not become a complete Radiant. After the battle, while talking to a wounded soldier, he said his second oath and then becomes a full Radiant.

Rua, who is nicknamed Naco by Lopen, plays with him at the war camps where the wounded are being cared for. He is still at the beginning of his consciousness. When Lopen teaches Rua how to make a rude gesture, the spren proceeds to use it indiscriminately, once even growing an extra pair of arms to make a quadruple rude gesture towards the Stormfather himself.[1]

“Life before death, strength before weakness, journey before pancakes. ”

Rua and Lopen bonded which means they now have a close and intimate relationship. They have a good time together as they play hide and seek or make gestures to other people. Rua follows and imitates Lopen.[1]

This page is probably complete!
This page contains most of the knowledge we have on the subject at this time.
It has yet to be reviewed.
Retrieved from "https://coppermind.net/wiki/Rua?&oldid=129960"
Categories: