This page or section needs to be updated with new information for Sunreach, ReDawn, and Evershore!
Be aware that in its current state, it may not include all additional content yet.

A platform is one of several types of space station. In particular, the term is used to describe massive floating metal cities that are thought to be originally designed by humans.[1][2]

“The platform resembled others of its kind—a flat sheet of metal fifty miles long, with buildings sprouting from both its top and bottom. It wasn't a ship, or even a space station—it was nothing more than a collection of random buildings surrounded by a bubble of air. ”

During the Phone Company era on "Old Earth", humanity deployed a number of space stations throughout the solar system. Older stations had been built in a more conventional style, and used a sphere or force field technology to maintain a livable atmosphere. However, newer stations were developed that were made of a fifty-mile long sheet of metal (ideally telanium) with tall, multilevel prefabricated metal buildings built into both sides. These cities, known as "platforms", were self-sufficient through the use of element-specific gravity and fusion generators, and could sustain millions of residents. Some platforms were in planetary orbit, while others were in the space between planets. It was expensive to live on a platform, and the most distant platforms were several months travel from earth.[1]

Centuries after the Phone Company era, the human prison planet known as Detritus was surrounded by multiple layers of platforms. These platforms could exceed one hundred meters in length, and were so numerous that they looked like metal shells around the planet.[3][4] The platforms included skylights, living quarters, shipyards, and automatic defense weaponry.[5] The human residents of Detritus referred to the platforms as "ancient" and believed that they predated their arrival.[4][6] By the time of the Battle of Alta Second, some platforms had fallen into visible disrepair (particularly those closest to the planet),[4] but many of the automatic gun turrets were known to still be functioning.[7] Although the creators of the platforms were not known, previous human habitation of Detritus was suspected due to the presence of Old Earth languages on the planet;[6] the platforms were also observed to include skyscrapers similar to those seen on Old Earth.[4]

Assisted by M-Bot, the DDF was able to begin landing on platforms to reclaim them.[4] One of the largest reclaimed platforms, christened Platform Prime, was used as the DDF's orbital headquarters. It had artificial gravity and atmosphere, and was generally in good operating condition.[8][9] DDF technicians were able to hack into the platform's data banks—aided by built-in security exceptions for humans[4]—and found video confirmation of the platform being used by ancient humans.[6] The Detritus platforms were confirmed to date back to the Second Human War[10] and the arrival of the delvers.[6] 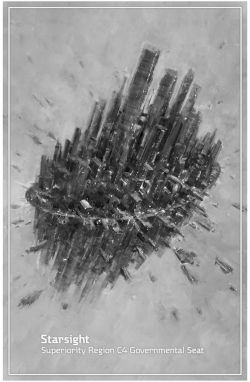 “The station looked kind of like one of the platforms that surrounded Detritus. A floating city—shaped like a disc, with buildings sprouting from both sides. A bubble of something glowing and blue surrounded it. ”

When Spensa first approached the Superiority space station Starsight, her description of the station was strongly reminiscent of both the Detritus platforms and Old Earth-built platforms such as Evensong.[2] Starsight had an artificial "bubble" atmosphere and metal buildings built on both sides of a large disc.[8] Morriumur indicated that the Superiority oversaw dozens of platform cities like Starsight that had existed for hundreds of years.[11] It is unclear if humans actually built these platforms or if alien races who had early contact with humans (such as the tenasi or varvax)[1] copied their design and technology. The Superiority also used similar artificial atmosphere technology to run smaller platforms, such as mining stations.[12]

This article is still missing information. Please help The Coppermind by expanding it.
This article was complete and reviewed prior to Sunreach, but now needs to be updated.
Retrieved from "https://coppermind.net/wiki/Platform?&oldid=161837"
Categories: