The Outer Market is a collection of shops that is part of the Alethi warcamp complex on the Shattered Plains of Roshar.[1] 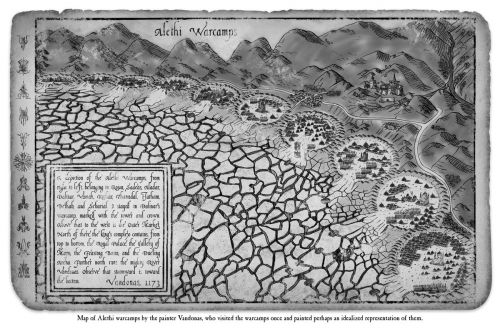 The Outer Market is located near the center of the warcamps, just north of Vamah and Dalinar's camps. It is not far from the Pinnacle, although it is separated from the palace complex by a steep hill.[2]

The market consists of ramshackle buildings built from stone blocks quarried nearby. It is not well-organized, nor does it have a defensive wall like the warcamps. It includes many different shops, including multiple wine shops and some restaurants.[3][1] Because the market is situated on a hill, some shops have patio terraces that provide views of the warcamps.[4] The market also contains stables and a menagerie.[4][3] When a highstorm approaches, merchants quickly take down their tents and close up doors and windows;[4] the market provides stone bunkers where patrons can wait out the storm.[5]

The Outer Market is largely unregulated; it falls under the purview of the Highprince of Commerce, but this position was vacant during the reigns of Gavilar and Elhokar.[6] It is among the few places where people from multiple warcamps mix, as it is considered to be neutral territory. The customers are therefore very eclectic; many of the merchants are Thaylen.[1] It competes with the markets that are inside each warcamp.[5]

The Market’s disorganized nature was due to the fact that it was built quickly during the War of Reckoning without the planning that went into the warcamps themselves.[1] Because it was still new, the ornamental shalebark used in landscaping was only a few inches high.[5]

Although some parts of the market were a bit seedy,[3] it also had luxurious establishments that were frequented by high-ranking lighteyes from different princedoms, providing opportunities for social interaction.[4][1] However, due to the lack of regulation, crime in the market began to increase, Dalinar Kholin assigned several battalions of his troops to patrol the Outer Market and areas between the warcamps.[7][8] Although these patrols cut down on bandits, they weakened Dalinar's ability to go on plateau runs to capture gemhearts.[9] When Kaladin was promoted to the rank of captain, he suggested that the former bridgemen in his command be assigned to these patrols to gain experience,[8] to the amusement of Torol Sadeas.[5] Despite its chaotic nature, Dalinar wondered whether the Outer Market would become more permanent as the Alethi solidified their control over the Shattered Plains.[10]

The fate of the Outer Market after the Battle of Narak is unclear. Most of the population of the warcamps moved to Urithiru, presumably including some of the merchants who set up shop in the Breakaway. When Veil visited the warcamps looking for Ialai, she noted that even the markets within the warcamps had fallen into disrepair;[11] the Outer Market likely suffered a similar fate.

This page is complete!
This page contains all the knowledge we have on the subject at this time.
Big Smooth (talk) 01:22, 19 November 2021 (UTC)
Retrieved from "https://coppermind.net/wiki/?title=Outer_Market&oldid=160683"
Categories: