Shu-Dereth is a religion practiced on the Selish continent known as Opelon (Aonic term) or Sycla (Fjordell term).[1][2][3] During the events of Elantris, it is the official religion of all nations east of the Dathreki mountains; Arelon and Teod are the only nations within the “known world” that remain holdouts. [1][4]

The Derethi worship an unforgiving god known as Jaddeth, who rules from a throne beneath the earth. The central tenet of the faith is the achievement of unity of all mankind under the rule of one nation.[1]

Jaddeth’s Return
The Derethi believe that when all men are unified under the rule of one nation, Jaddeth will rise from his slumber and return to the earth. Wyrn Wulfden the Fourth, in a letter attributed to Jaddeth, calls this event the “Day of Empire.”[1]

Elantris
The Derethi believe the Elantrians to be vile, blasphemous, and altogether unholy.[5] Dilaf, gradget of the Dakhor monastery, believes them to be Svrakiss.[6]

Svrakiss
The Derethi believe that the souls of men who hated Jaddeth during life become Svrakiss. The Svrakiss are considered to be evil entities barred from entrance into heaven and are said to have the power to take over the bodies of living men and control their actions.[7]

Seons
Seons, as a result of their association with Elantris, are considered to be heathen magic. As such, only select Derethi who have the most faith and self-control are allowed to use seons.[8]

Derethi scriptures are contained in the Do-Dereth, though they also study the text of their parent religion, the Do-Kando of Shu-Keseg.[1]

The religion of Shu-Dereth is very regimented, and its structure has been compared to that of a feudal government system.[6] Followers are expected to obey the commands of their superiors, and priests are expected to give orders rather than shepherd others on the path to faith.[1]

A formal example of this type of relationship is that of the odivs, krondets, and hrodens. Members of the Derethi priesthood can elect to become a hroden, or master, taking on one or more odivs and/or krondets. Krondet is the less restrictive form of servitude, where the krondet listens to the counsel of his hroden but is not bound to do as told. Odivs, however, must follow the orders of their hroden, essentially serving as a slave. Many choose the role of odiv in order to gain power through their connection to their hroden.[1][10] 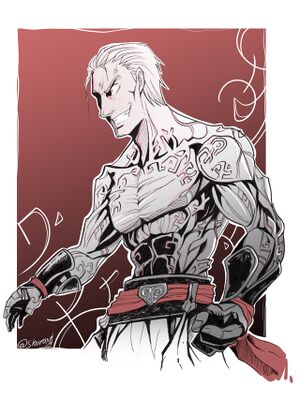 The Derethi believe that only one man – the Wyrn, or ruler, of Fjorden – can serve Jaddeth directly. All others serve only those in the position directly above them in the chain that links all people to Lord Jaddeth. This prevents those in the lower ranks from having to worry about commands of Jaddeth that are beyond their capacity to understand.[8]

“For centuries, the Derethi priesthood had been training its monks in war, assassination, and…other arts. ”

—Hrathen, reflecting on the impact Derethi monks could have on Arelon[20]

Entering Derethi priests are required to join a monastery for training related to both religion and combat.[1][21] Most monasteries, like Ghajan, the monastery Hrathen attended after leaving Dakhor, train simple soldiers. Others, however, provide more specialized training:[18]

Shu-Dereth developed when one of Keseg’s students, Dereth, set out from JinDo to spread Shu-Keseg’s central tenet of unity of all mankind, teaching that it should be achieved by uniting all mankind under one nation.[14] These teachings were later used as the basis for a new faction of Shu-Keseg, named Shu-Dereth after its founder.[3]

Dereth’s ideas were originally rejected in his native JinDo; however, they were embraced by the Fjordell. Shu-Dereth has been the official religion of Fjorden since the reported conversion of Wyrn Wulfden the First and has spread to all of the eastern nations.[3] Since that time, the leader of Shu-Dereth takes the title Wyrn upon his ascension, which serves as both a political and a religious title.[23]

Fjorden Interpretation of Dereth’s Teachings
Upon adoption of Shu-Dereth, the Fjordell people appropriated Dereth’s teachings and twisted them to their own ends.[24] The prime example of this is the transformation of Shu-Dereth into a militaristic organization; however, other examples include:

“Like two plants competing for the same ground, Shu-Dereth would strangle Shu-Korath.”

Holy War
Fjorden’s militaristic society adopted Shu-Dereth as a vehicle for dominion, conquering all countries east of the Dathreki mountains an attempt to bring about the Day of Empire.[25] The Derethi accomplished this through both the military might of their priests and through political sabotage.[7][4]

To this end, Wyrn sent Hrathen to convert Arelon and then Teod to Shu-Dereth; if he failed to convert the countries, Fjorden planned a genocidal slaughter of all people of Aonic descent.[4] This culminated in Wyrn sending Dakhor monks to Arelon and Teod for the Invasion of Arelon and the Battle of Teoras. Both these attacks failed, however, and Arelon and Teod remain independent[26]

This article is still missing information. Please help The Coppermind by expanding it.
Retrieved from "https://coppermind.net/wiki/Shu-Dereth?&oldid=173190#The_Great_Chain"
Categories: