Nicelle Sauvage, also known as Nicki Savage[2] is a Scadrian noblewoman and detective most famous for her published adventures, originally done under the Allomancer Jak brand.

Her adventures are published in the The House Record and The New Ascendancy.[3][1] She learns the art of storytelling from Jak.[4] Like Jak, she embellishes her stories.

Sauvage is depicted in her publications as being a young woman approximately in her mid-twenties.[1] She is depicted as being quite pale and a natural brunette with curls.[5] She is presented as a fashionable individual, consistently wearing high-quality dresses and sun hats, as well as makeup and custom Miele Jedon boots. She also wears a satchel.[1][5]

In terms of personality, it appears that Nicelle has had a dramatic shift in her outlook during her adventures throughout Scadrial. Although she explored outreaches of society in 342, she was self-admittedly not very brave, being fearful of even interacting with a strange figure she saw along her travels.[3] Upon being discovered by Jak and publishing under his brand name, however, it seems that this fearfulness began to leave her slowly, to the extent that she showed little hesitance in charging at Nazh in order to prevent him from taking a map she needed for one of her adventures.[1] Over the ensuing five years, her interest in exploring the rest of Scadrial and the cosmere only grew until finally she was excited at the prospect of exploring it all.[5]

Sauvage is a Leecher, granting her the ability to remove Investiture from objects so long as she can touch them while burning chromium. She also claims that she was taught under Baz-Kor monks who trained her on a fighting style that lets her get close enough to use her abilities against an opponent as well as general self-defense techniques. As a child, she was also trained in ballet, something which she claims helps her achieve feats of athleticism in the present time.[1] Over time, Nicelle also came to learn about the wider cosmere and developed at least a basic understanding of its workings.[5]

Nicelle Sauvage was born on an unknown date. She was raised as a noblewoman in New Seran and was eventually trained in self-defense under the tutelage of Baz-Kor monks, as well as ballet. Her family eventually came into possession of Pinecone Allomouser the Third, a cat.[1][3]

During this time, it seems Nicelle developed a habit of exploring the Roughs surrounding the Basin. One of her trips eventually took her towards the southern mountains, during which she was separated from her peers. At the time she did not know what their fates were and considered it a real possibility that they had died. While by herself she eventually came upon a clearing in the mountains which contained a pool inside of it. Emerging from the pool was a "dark figure" whose only discernible features were their eyes. Fearful, Nicelle abandoned the location and hiked an hour away from the pool before setting up camp. Eventually, she managed to return to civilization where she then recalled her story to the local broadsheets.[3] 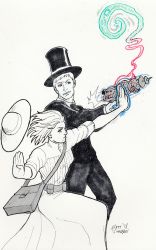 Over the following year, tales of her adventures eventually reached the ear of Jak and it was agreed for her to start publishing her tales in a serialized nature under his brand name. During this time she was advertised as a Paranatural Detective by Jak. Eventually, her father, Stefan, passed away and left Nicelle an inheritance which included a map of the city. Allegedly, this map had a secret pocket which contained instructions on how to discover a tribe of metal beings created by the Lord Ruler known as the Kalkis. Before Nicelle could retrieve these instructions, however, the map was stolen from her by Nazh[4] wearing a mistcloak as a disguise. During the ensuing struggle, Nicelle managed to steal one of Nazh's devices and pocketed it while Nazh himself ran away towards a nearby gondola. Nicelle gave chase and managed to jump onto the side of the gondola and cling on just as it departed from its dock. While clinging on, Nicelle glanced inside and saw Nazh fiddling with a glowing device, one she presumed was to provide his means of escape. Panicked, Nicelle grabbed hold of the device she stole from Nazh and rammed it into the gondola door, causing an explosion, destroying the door and releasing a cognitive shadow. It is unknown if the device Nicelle used unleashed the shadow or if Nazh shot it at her using his gun like Nicelle presumed. If the latter, Nazh was not intending to kill her with the shot.[1][4]

With the door now removed, Nicelle entered the gondola proper and saw it was littered with a variety of Nazh's devices. He pulled a gun of unknown function on her, causing her reflexes to kick in. She approached him swiftly and used her leecher abilities to drain the device of its Investiture. Upon seeing this, Nazh panicked and tried to take aim again, but this time Nicelle kicked the gun out of his hand and let it plummet off the gondola. While he was distracted, Nicelle grabbed hold of the map. Before she could take it, however, Nazh grabbed onto his side of it. The pair wrestled for control over it, all the while insulting one another until eventually, Nazh fell out of the gondola. Nicelle offered a truce to try and pull him up, but Nazh declined and opted to cut the map in half, causing him to plummet. After confirming her half of the map had the clue she needed, Nicelle travelled down to where Nazh should have landed but found no evidence of him there nor any witnesses to him. While searching, she bumped into Hoid[6], who offered to tell her a story which she declined. Upon reaching home, she immediately consulted the map for the next clue on her journey.[1]

During the six following years, Nicelle eventually served as Jak's assistant for a brief period, which she would consider one of the strangest times in her life, and then became an independent adventurer again. During these adventures, she allegedly befriended two Faceless Immortals named KeSun and Tabaar who later became her travelling companions. Together, they went on many adventures, with one involving Tabaar having to disguise himself as Human in A Hero for All Ages. She met the Haunted Man many more times as well throughout her travels, to the extent that Nicelle counted him as one of her adventuring companions, and they made a promise with each other to explore the cosmere together. Their relationship slowly took on a romantic tension.[5] Following a public dispute between Jak and his sidekick Handerwym, Sauvage would decide to continue under Handerwym's brand. Her newer stories contained comments making fun of Jak's stories and she was more open to Handerwym editing her work.[5]

Eventually, Nicelle's travels led her to find the Compass of Spirits, which she believed was central to saving Scadrial. The compass possessed the ability to send one to the ghostly dimension. While attempting to reach their destination, one of Nicelle's rivals, Vila Mecant, stole the compass but forgot to take the key with her. Nicelle moved to hand the key to the device to Nazh so that he could keep it away from Vila while Nicelle persuaded her two companions to merge together into a bird. With this done, they gave chase to Vila and Nicelle fought her off, managing to retrieve the compass in the process. Afterwards, she spoke to Nazh who held her and then moved in for a kiss before stealing the compass from Nicelle. He apologized before disappearing to the ghostly dimension. Realizing the betrayal, Nicelle was hurt and panicked, realizing that there was no way for them to locate Nazh, concluding their quest was lost. KeSun and Tabaar, however, stopped Nicelle and told her that there was another way to enter the ghostly dimension that they had never told her about.[5]

Nicelle and Nazh originally met when the latter tried to steal a part of her inheritance, a map of New Seran given to her by her father. During this altercation, the pair originally fought one another, which ended with Nazh dangling out of the gondola they were in. Nicelle attempted to reach down and save his life but he rejected the offer. Though quite angry with him over the theft of the map, Nicelle admitted that she found Nazh quite attractive, calling the timbre of his voice enjoyable and stating that she enjoyed remembering his face.[1]

“You silly man. You'll never get rid of me that easily. It's you and me exploring the cosmere together forever. Just like we promised.”

Over the following six years, Nicelle and Nazh's paths crossed frequently with one another, during which their relationship slowly grew less hostile. Eventually, Nicelle considered him as one of her travelling companions and the pair made a promise to one another to explore the cosmere together. During this time, it appears that their relationship also took on a more obvious romantic tension. Unfortunately, their travels ended during the Compass of Spirits incident where the pair moved to enter the ghostly dimension. Upon retrieving the compass, Nazh, for reasons unknown, betrayed Nicelle by tricking her into thinking they were about to kiss before pickpocketing the compass for himself and entering the ghostly dimension by himself. It appears that he was not happy about this as he apologized to her for doing so.[5]

This article is still missing information. Please help The Coppermind by expanding it.
Retrieved from "https://coppermind.net/wiki/?title=Nicelle_Sauvage&oldid=176774"
Categories: