“Rithmatic this, Rithmatic that! Protect the kingdom, keep the wild chalklings at bay. Why does everything have to do with Rithmatics? Can't a girl spend some time thinking about something else for a while? ”

Melody is a student at Armedius Academy at the same time as Joel Saxon.[2]

She is a Rithmatist, but is not very good at drawing circles and other defensive formations. However, she is gifted at drawing chalklings, especially unicorns. Joel once took a look at her notebook and found it full of castles and unicorns.

Melody was William's sister. They came from the Floridian Atolls where their parents still lived. Both of Melody's parents and all of her siblings are Rithmatists. Due to the great distance between their home and the Academy, they only come visit Melody once a year, when the Melee happens.

Both parents as well as William's and Melody's siblings are Rithmatists, a fact that seemed to be nearly impossible.[3] 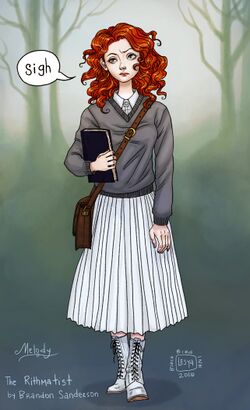 Melody met Joel for the first time outside Professor Layton's class, before going inside to speak with the professor. Joel was surprised that she drew unicorns in her notebook, thinking she should be practicing her Rithmatic lines instead.[1] When Nalizar became a full professor, he put Melody in charge of delivering mail to professors instead of Joel, assigning her to preform the deliveries every day after her summer elective.[4]

—Melody on her first day of remedial studies[5]

As a student in what was once Professor Fitch's class, Melody was assigned to Fitch for remedial studies over the summer. Fitch set her to work tracing the Matson Defense, which annoyed Melody. Fitch, however, said it was important for Melody to practice the basics. Joel, who was serving as an assistant to Fitch, was going through census records. Melody asked Joel if he wanted to swap tasks, but Fitch could hear her easily.[5]

Over the next week, she worked on tracing the Matson, Osborn, Ballintain, Sumsion, and Eskridge defenses. Fitch taught Melody about keening, the art of figuring out what circle your opponent was drawing and figuring out which strategy would counter it. Melody and Joel competed, drawing defenses, and Fitch judging which would've won in a real duel. They grew quite competitive, Joel eventually insulting Melody and offending her greatly.[6] Though Joel apologized, Melody didn't speak with him for a time. A few days later, when Melody was sitting at her customary solitary table at dinner, Joel asked her to help him get into the Rithmatic section of the campus library. Melody agreed, ostensibly because she just wanted to get a peek at Nalizar. Melody found out for Joel that Nalizar was researching new Rithmatic line theories, and also checked out a book for Joel, not knowing it was on the origins of Rithmatics. Joel complimented Melody on her skill with chalklings, and taught her the Jordan Defense to let her use them more effectively.[7] Joel became involved in the investigations regarding missing Rithmatic students, but Melody was not privy to the same information. One night, when Melody was sitting alone at dinner, Joel invited her over to sit with him and his mother. Joel asked about Rithmatic inception ceremonies, but Melody refused to say anything about them. They avoided the topic afterward, Melody declaring that they should get ice cream at a parlor off-campus.[3]

On their way to the parlor, Melody asked Joel about his inception ceremony, and why he wanted to be a Rithmatist. Joel couldn't afford the expensive ice cream, but Melody gave him money to pay for both of theirs. She let him keep the change, which was practically a fortune to Joel. They both saw a newspaper, which had an article from a reporter that had interviewed and tricked Fitch into revealing information about his investigation.[8]

When Charles Calloway was kidnapped and Joel and Fitch went to investigate the crime scene, Melody was assigned to stay at Fitch's office and work on her tracings. However, she followed them to the scene, spying on them. She was caught, and interrogated by Inspector Harding. He was suspicious that she might be the Scribbler, the person behind the kidnappings, but Joel vouched for her.[9]

“Joel! I have decided that I'm brilliant!”

Melody had an idea, and wanted to tell Joel about it, but Joel was distracted. There had been unknown Rithmatic lines at the crime scenes, and he had recognized them from his dead father's workshop. Melody followed him down to the shop, and they found the lines drawn on a blackboard. Melody told Joel that his inception had been botched, since it hadn't been preformed on the Fourth of July. Melody convinced Joel to try and redo his inception. Melody was adamant that it would work.[10]

“Tantrums are a noble and time-tested strategy. Particularly if you have a good set of lungs and are facing down a crotchety old priest.”

Joel asked Father Stewart about redoing his inception, but Stewart was reluctant. When Melody argued on Joel's behalf however, she convinced him to agree with pure force of will.[11] Joel accompanied Melody the next day as she ran her errands, and Melody told him about her family and her brother's death. Joel, who suspected Nalizar of being the Scribbler, theorized that Nalizar had been involved in her brother's death. Melody was angry, saying that Nalizar had nearly died trying to rescue him.[12]

The Scribbler attacked Joel the night before his inception, but they still went to the ceremony the next day. Melody attended, Joel getting permission for her to leave the lockdown that Harding had imposed at Armedius. When Joel finished his inception, he was not a Rithmatist. Melody was disappointed, having truly believed it would work.[13]

—Melody as the Scribbler attacked[14]

Late that night, Melody and Joel were on a walk when they found Harding's men outside a dormitory unconcious. They realized that the Scribbler was attacking one of the dorms, and Melody went to get help while Joel went inside to confront the Scribbler. Joel found that Harding was the Scribbler, Nalizar arriving and being defeated by Harding. Melody arrived with Fitch, and freed Joel from a box of Lines of Forbiddance.[14] While Fitch and Harding dueled, Joel helped Melody draw a maze of Lines of Forbiddance to occupy large numbers of Harding's wild chalklings. Fitch won the duel, and Joel threw a bucket of acid on Harding, which got rid of the Forgotten possessing him. The wild chalklings began to turn into students, which had been transformed. Melody hurridly dismissed her Lines of Forbiddance, and the Rithmatists were brought back. Included in the group was Melody's brother William, whom she joyfully embraced.[15]

“If we go out, we go out dramatically! Nine-pointer! ”

—Melody to Joel at the start of the Melee[16]

As Fitch's only Rithmatist student, Melody was required to participate in the Melee. In a move that was technically legal, Joel joined Melody's team at the last moment. They were placed at random in the center of the arena, the worst position. They worked together as a team during the melee, Joel drawing lines with his chalk and Melody tracing them with hers. Joel also drew Xs in various points to denote where Melody should draw chalklings. They drew a complex Easton Defense, a nine-pointer. With both Joel’s mastery of Rithmatic defenses and Melody’s skill with chalklings, they won the melee, defeating Nalizar’s students and everyone else.[17]

This article is still missing information. Please help The Coppermind by expanding it.
Retrieved from "https://coppermind.net/wiki/?title=Melody_Muns&oldid=176932"
Categories: