Mayalaran is a deadeye cultivationspren[2] who was bonded to an Edgedancer before the Recreance.[3] She is currently the Shardblade of Adolin Kholin, who nicknames her Maya.[4] 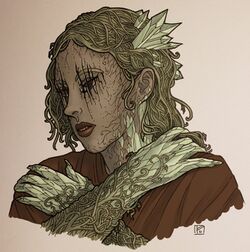 Maya's appearance in Shadesmar is that of a woman with scratched-out eyes, akin to a painting with the features scratched out rather than simply empty sockets.[5][6] Her features seem to be made of ashen brown cords the thickness of hair,[5] giving her skin the appearance of rough cloth[6], string[7] or brown vines.[8] She has crystalline hands with long nails.[8][2]

In the Physical Realm, Maya appears as a Shardblade. The blade itself is shaped like a larger version of a standard longsword, and bears some resemblance to the enormous two-handed broadswords traditionally wielded by the Horneaters. The cutting edge is smooth and sinuous, like an eel, while the back has ridges of crystal.[9]. When summoned, the mist it forms from is in the shape of vines.[3]

“You want to fight it, don’t you? It reminds you of when you were alive. ”

Not much is known about Maya's personality. Her face is devoid of emotion at all times[7][8] and she mostly communicates through screeching.[6][8] She always follows Adolin unless prevented, as deadeye spren follow or search out their corpses.[7] However, she did, of her own volition, protect him from a Fused. During the Battle of Thaylen Field, after Adolin talks to her, she tells him her name and even appears in his hand in seven heartbeats instead of the usual ten.[4] She later replicated this during a battle in Jah Keved.[10] When Adolin gives her to Hrdalm, she sends him a sensation of resigned agreement.[4] This suggests that rather than "dead", she -- and, by extension, other deadeyes -- is simply broken.

During the trial at Lasting Integrity, Maya managed, with Adolin's encouragement, to speak up in his defense.[1] Her state since has improved somewhat, but she's still not very communicative.[11]

Mayalaran was killed by her bonded Edgedancer when they abandoned their oaths, believing that the Nahel bond would bring about the destruction of Roshar the way it had for humanity's homeworld.[12] During Adolin's trial, she reveals that she, along with all the other deadeyes, had chosen to sacrifice themselves through the Recreance: they were willing partners to the end of the Knights Radiant.

At some point before the War of Reckoning, Adolin dueled a lighteyes named Tinalar. Against everyone's expectations, he won the duel and secured Maya as his own. At the time, her name was unknown to anyone living. Believing it to be pretentious to give her one that wasn't hers, Adolin left her unnamed.[9] 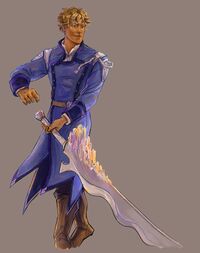 Adolin often spoke to Maya and imagined that she listened to him. He believed that something that seemed like an extension of the soul itself was impossible to wield without feeling as though it too was alive.[9] This in turn may account for some of the differences in the relationship between Adolin and Mayalaran in regards to other deadeye spren.

Maya was one of the shards placed on the line in Adolin and Dalinar's dueling campaign to disarm the Shardbearers of the Highprinces.[13] The most important duel of these was the one against Relis, Elit, Abrobadar and Jakamav.[14] She was also present in many battles, including the Battle of the Tower[15] and the Battle of Narak.[16]

Adolin talked with Maya before he, Kaladin, Shallan and Elhokar stormed Kholinar Palace. He acknowledged that she was a dead spren and that he was sorry there was nothing he could do to fix that. He thanked her for all the years they've fought together and promised to try and use her only to do good.[17]

Maya and Adolin met for the first time when he crossed over into Shadesmar[5] with Shallan, Kaladin, Vivenna, Pattern and Sylphrena from the corrupted Oathgate in Kholinar.[18] Pattern informed them all that Maya is quite dead. Usually, she trailed after Adolin, but when he didn't move, she remained motionless,[6][19] and to go elsewhere she had to be lead by the hand.[2]

When travelling with the Reachers, Maya was locked in a small room in the cargo hold by Captain Ico, who introduced the term "deadeye" to the group. He told Adolin that deadeyes wouldn't watch where they're going, which is why he couldn't have her on deck. He wasn't happy with Adolin's attitude towards her, telling him that he should not pretend Maya is his friend, and that she was only a tool to him.[7] 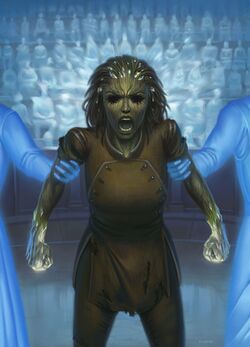 by Nozomi
Held by the honorspren

At the Thaylen City Oathgate in Shadesmar, Maya protected Adolin from one of the Fused without prompting and as a result she was stabbed with a sword, but didn't react beyond screeching.[8] Later, once they reached Thaylen City proper, she and Adolin faced the thunderclast. Adolin believed she was made to fight them, being overly long for dueling, and that she wanted to fight because it reminded her of when she was alive. In response, she told him her name.[4] During their fight, Adolin was able to summon her in only seven heartbeats after he pled with her to appear before the thunderclast caught him.[4] After being too injured to continue, he loaned Maya to Hrdalm, to which she responded with a sense of resigned agreement.[4]

“She was the only judge who ever mattered, and today was her chance to offer judgment. You passed. ”

Maya has been at least partially revived.[1] She regains consciousness during Adolin's trial by witness in Lasting Integrity while under physical restraint and emotional stress, in order to prevent the honorspren judge from using her as a witness to condemn Adolin for the Recreance.[1] Maya explains that she willingly took that risk, knowing that it was possible that the spren would die when their Radiants forsook their oaths. She did not know that she would become a deadeye, but did accept the possibility of death.

Once partially revived, Maya did not return fully to her pre-deadeye form. Her eyes remain scratched out, but she is able to speak and converse. Her thoughts and speech seem slightly slow or off, although that may simply be due to being newly revived and overwhelmed. Being revived did not create a Nahel bond between Adolin and Maya, though Adolin notes that he can sense her emotions and awareness, which is not part of a Nahel bond.[1] It is unclear whether a deadeye can be completely restored to their original form.

This article is still missing information. Please help The Coppermind by expanding it.
This article was complete and reviewed prior to Rhythm of War, but now needs to be updated.
Retrieved from "https://coppermind.net/wiki/Mayalaran?&oldid=160532"
Categories: