Magna[3] (Callsign: Morningtide) is a Vician cadet in Skyward Flight.[2] Morningtide dies during battle, approximately a month after she begins flight school.[1][4] 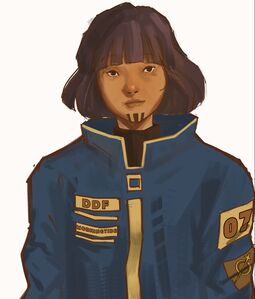 She is a quiet Vician girl with a tattoo on her lower jaw, visible even while she is wearing her helmet.[5][6] Her voice is thickly accented and she rarely speaks while around her flightmates or during class.[2][7]

She is Vician and hails from Vici Cavern. She has a culture distinct from the other members of her flight, and is a descendant of the marines that served aboard the Defiant.[6][5] Her shy nature stands as a juxtaposition to the stereotype that Vician's are always mighty warriors.[6]

Morningtide's quiet nature, due to her broken English, sometimes makes her come across as standoffish and aloof to her classmates.[6][5] This language barrier likely makes it difficult for Morningtide to make friends, causing her to keep to her self.[5] She feels embarrassed by her lack of understanding and struggles to ask for clarification during class.[8]

As someone who passed the flight school entrance exam, Morningtide is highly knowledgeable about piloting and starfighters.[6] She has trained to pilot a Poco, perform aerial maneuvers, and use its weaponry. She doesn't always understand the instructions and comments given to her by Cobb, but she comprehends a majority of what he says.[8]

Morningtide speaks at least two languages, though she is not fluent in English.[5] 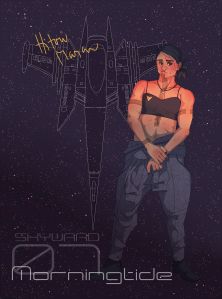 After passing the entrance exam, Morningtide was placed in Skyward Flight under the tutorledge of Cobb. She was roomed with the other female members of her flight, with the exception of Spensa, who was denied accommodation.[9]

On the first day of flight school, Morningtide, along with the rest of Skyward Flight, were ordered to take to the sky after the Krell attacked. They were instructed to line up close to the battle to deceive the Krell into thinking there were more pilots ready to join the conflict. After the battle, she escorted Rigmarole's back to base while the other members of the flight waited for reinforcements. Morningtide did not wait for the other members of Skyward Flight to arrive back at base before taking Rig somewhere to rest.[9]

The second day found Morningtide eating her lunch alone in the classroom instead of in the mess hall with the other cadets. Spensa found her in the room and tried to engage her in a friendly conversation, however, turned hostile when Mortingtide was unable to respond. After the other cadets arrive and they go through their class, Cobb took feedback on his teaching methods, leading both Cobb and Spensa to realize that English was not Morningtide's native language.[5]

When the class moved on to practicing with light-lances, Cobb attempted to encourage Morningtide while the cadets did exercises. She did not completely understand what he had said to her and asked Spensa to explain his instructions further when the other girl came to check on her.[8]

A few days later, Skyward Flight was once again sent into battle against the Krell, this time fighting alongside full pilots. During the skirmish, three Krell ships began to tail Morningtide. Both Spensa and Kimmalyn attempted to help her, however, she was hit by Krell fire and died when her Poco exploded.[1]

Morningtide's death affected many of her fellow pilots, including those in her flight and her flight instructor.[10][11][12]

“Hey, what did they have? Smells like gravy. Algae paste stew? Potato mash? Pork chops? Don’t worry, I can take it. I’m a soldier. Give it to me straight.”

—Spensa attempting to be friendly with Morningtide[5]

Spensa initially took a disliking to Morningtide as she found the other girl to be standoffish and unfriendly, even towards those who made an effort to be her friend.[13] Spensa thought that Morningtide's attitude towards her may have been due to arrogance or a issue the other girl had with her, however, Spensa later discovered that the Vician girl was not a native English speaker.[5] After the language barrier was acknowledge, Morningtide and Spensa became better friends, with Spensa providing support to Morningtide with further explanations of the Cobb's instructions when they were not clear to the girl.[8] Spensa was hit hard by Morningtide's death and struggled with her grief after losing her friend, keenly aware of the holes that had been left in the flight by the loss of Morningtide and Bim.[10] Despite her initial struggles to vocalize her feelings about the loss of her friends, Spensa was able to offer the other members of Skyward some words of comfort after they returned to duty following the death of Morningtide and Bim.[10][11] It took several weeks for Spensa to work through her grief and to get to a place where she was not continuously affected by the other girl's death.[14]

As Morningtide's flightleader, Jorgen took her death hard, however, at first tried to put aside his grief to offer his support to the rest of his flight. Following her death, Jorgen frequently replayed simulations of the battle to see if he could have saved her, if he had acted differently. Although he ran through multiple scenarios, he did not find one where she could have been saved, which caused him great frustration.[15]

“Morningtide! Don’t be timid, cadet! Get in there! I want you to swing from so many scudding lines of light that you get rope burns! ”

—Cobb's attempts to be encouraging.[8]

Cobb was initially unaware of Morningtide's language barrier.[5] He blames Ironsides for Morningtide's death, believing that the Admiral was wrong to be sending under-trained cadets into real battles.[4] Spensa finds him re-watching the battle, however, it is unclear if, like Jorgen, he was attempting to recreate scenarios where the female cadet had been saved or if he was watching the recording for another reason.[11]

This page is complete!
This page contains all the knowledge we have on the subject at this time.
LadyLameness (talk) 11:09, 6 September 2019 (UTC)
Retrieved from "https://coppermind.net/wiki/Magna?&oldid=166577"
Categories: