“I am the Lopen, which means I am ready for anything at any time. You should know this by now. ”

Lopen is a Herdazian member of Bridge Four and a Windrunner on Roshar.[2]

“A one-armed Herdazian is still twice as useful as a no-brained Alethi. ”

Like all Herdazians, Lopen has slate-colored crystalline fingernails. He is a short, spindly, brown-haired man in his early twenties[4], with skin just a shade too dark to be Alethi. He had an old slave brand on his forehead, but that is now covered with a Bridge Four tattoo. Most strikingly, when he joins Bridge Four he is missing his left arm[5][6], although he eventually regrows it with Stormlight.[7]

He speaks with a quick accent[8] and has a tendency to use Herdazian words like gon, gancho, or mancha when referring to people he's talking to.

Lopen has a very positive outlook in life. Despite experiencing great misfortunes, he never accepts these things as part of his identity[9], and even jokes about his disability.[10][11] He is often nonchalant, exhibits the stereotypical[12] Herdazian arrogance (e.g. calling himself "The Lopen" and liberally using rude gestures when insulted[3][1][2]), and has a sense of humor that people around him find strange[13]. Even so, Lopen proves himself to be both compassionate and reliable.

Lopen's family left Herdaz when he was a baby and he was raised in Alethkar.[1] He lost his left arm through circumstances that have not yet been revealed. At some point he was enslaved; when or why this happened is unknown, but Kaladin noted upon meeting Lopen that his slave brand looked old.[5] 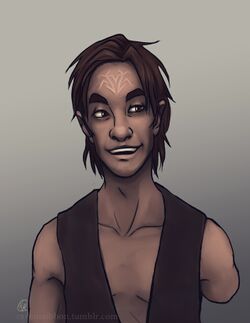 “Hey, gancho! Hey! You want me, I think. You can use me. We Herdazians are great fighters, gon. You see, this one time, I was with, sure, three men and they were drunk and all but I still beat them. ”

Unlike many of the Bridge Four members, Lopen supposedly did not hide a dark past. He was sent to the bridge crews not as punishment for a crime, but only because he was a nuisance.[14] He was not even aware of his situation, as he apparently thought he was entering the army as a soldier. He was the only person among the newcomers who did not have a defeated look of apathy on his face, and the only one volunteering to be picked when Kaladin came looking for a new recruit. Knowing that Lopen would probably not survive a single bridge run in other crews, Kaladin decided to choose him, instead of one of the taller men as he'd originally planned.[5]

Kaladin assigned Lopen to carry water for the crew during bridge runs. He was accompanied in this task by Dabbid and any member who for one reason or another could not help with carrying the bridge. This allowed such people to remain safe during bridge runs while still being considered useful, whereas in other bridge crews they would have been sacrificed by placing them in front of the bridge to take Parshendi arrows.[5]

Lopen's small team also carried medical supplies[15] for Kaladin later on, as well as other items like rope[16] and Parshendi carapace armor[3]. Eventually Lopen learned medical first aid from Kaladin and was given medic duties as well.[17]

During the Battle of the Tower, while unable to fight, Lopen helped by ensuring that Kaladin always had a spear in hand. He did this by taking spears from fallen Alethi soldiers and tossing one to Kaladin when needed.[17] After Bridge Four rescued the Kholin army in that battle, Dalinar Kholin had all Torol Sadeas' bridgemen freed, including Lopen.[18]

With the former bridge crews now a battalion headed by Kaladin under Dalinar's camp, Bridge Four members were given new responsibilities. Lopen was assigned as second lieutenant to the battalion's quartermaster, Rock, with Dabbid and Shen under him. As a Bridge Four member, Lopen also became part of Dalinar's personal guard, and like the others was given an official uniform on the same day that he received the tattoos that covered his slave brand.[19]

Lopen took part in Kaladin's experiments with Radiant powers, allowing himself to be stuck on walls and even joining in a sparring match with Rock and Sigzil against a Stormlight-Invested Kaladin.[11] He stayed behind in the warcamp during the Battle of Narak to take care of the barrack and to watch over an injured Kaladin.[20]

After Kaladin thwarted an assassination attempt on King Elhokar, the wounded king was taken to Lopen's home in Little Herdaz to recover. Deciding to conceal the king for his own safety, but being averse to lying, Lopen's family members somehow persuaded Elhokar to temporarily abdicate in favor of Lopen so that they could truthfully say that "King Elhokar" was not with them. This made Lopen the legitimate king of Alethkar for several minutes.[21]

Later on Lopen tried to convince the Alethi to add him to their list of kings, but to no avail.[22] 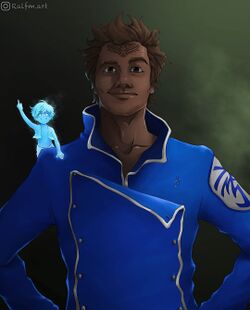 by Ralf Melevo
As a Windrunner with Rua

“Oh, storms yes! Everybody, give the Lopen your spheres! I have glowing that needs to be done. ”

Lopen always found Kaladin's abilities fascinating, particularly the ability to absorb Stormlight. He desired to "glow" like Kaladin[10][1], so much so that he was the only member of Bridge Four at the time who actively pursued becoming a Knight Radiant.[23]

He eventually became one of Kaladin's squires, finally achieving his dream of glowing, soon after Kaladin spoke the Third Ideal of Windrunners. Through the healing effect of Stormlight, Lopen was able to restore his missing arm.[7]

As a Windrunner squire, Lopen was able to harness the Lashings. He was particularly fond of using them to hang upside-down on ceilings, to the annoyance of others.[24][25] However, squires need to be in relative proximity to their Knight for their powers to manifest, and so Lopen lost access to the Lashings whenever Kaladin went on distant missions. This did not stop him from joining Shallan Davar and others in fighting the Unmade Re-Shephir within Urithiru.[26]

Kaladin assigned Lopen to help the First, Second, and Third Squads of the newly augmented Bridge Four to achieve squireship. He tried to impress them by flying but, not having mastered Basic Lashing yet at that point, he ended up just accidentally sticking himself to the ground with a Full Lashing, all the while insisting he'd meant to do it.[27]

He participated in the Battle of Thaylen Field, fighting the Fused.[28] Lopen later became a Knight Radiant in his own right, bonding with a male honorspren named Rua. He stopped during the clean up after the battle to try and comfort a Thaylen soldier who had lost an arm in the fighting. While Lopen was explaining the Immortal Words to the wounded man, he said the Second Ideal of the Windrunners, which the Stormfather accepted despite the fact that Lopen had been trying to save it for a dramatic moment.[2]

“ I’m an expert on one-armed Herdazian jokes. ‘Lopen,’ my mother always says, ‘you must learn these to laugh before others do. Then you steal the laughter from them, and have it all for yourself.’ She is a very wise woman.”

Lopen thinks highly of his mother, who encouraged his self-deprecating humor as a way to cope with his one-armed condition before he was able to heal himself. He currently lives with her in Urithiru. Lopen's mother has implied that Herdazian families are matriarchal, with the women possessing all authority inside Herdazian homes.[7]

“A man can never have enough cousins. ”

Lopen is related in one way or another to a significant portion of the Herdazian population in the Alethi warcamps[29] and often talks about his many cousins there. He often suggests going to one of his cousins for help, and is quite proud of their loyalty.[3] However, his definition of "cousin" is very broad and could include fifth cousins, or people dating his sister or his aunt.[30].

The following are members of Lopen's extended family:

“You can thank me, naco, for inspiring this great advance in your learning. People—and little things made out of nothing too, sure—are often inspired near the Lopen. ”

—Lopen to Rua, after teaching the spren how to perform a rude gesture[2]

Lopen's spren Rua appears to be as carefree as he is, and perhaps more mischievous. Rua's transition into the Physical Realm and his bond with Lopen is recent enough that he is not yet fully himself mentally, and Lopen acts like a sort of mentor to him, albeit only in matters of mischief.

“If you’re crazy, you’re a good type, and I like you. Not a killing-people-in-their-sleep type of crazy. Besides, We all follow crazies all the time. Do it every day with lighteyes. ”

—Lopen to Kaladin, on whether he'd follow him to battle if he was crazy.[31]

Like other members of Bridge Four, Lopen is loyal to their captain, Kaladin Stormblessed. Lopen has been invaluable in many of Kaladin's undertakings, acquiring and handling resources necessary to Kaladin's plans[5][16][3], providing helpful insights often wrapped in his unique sense of humor[11][32], and simply being a trustworthy companion.[31][13]

Lopen's lighthearted attitude often contrasts with Kaladin's seriousness, and at times the Bridge Four captain does not know what to make of the Herdazian.[13] Still, Kaladin has acknowledged Lopen's ability by promoting him to a leadership position just below that of Teft when Lopen reached the Second Ideal of the Windrunners.[2]

“Some of my cousins, they call me the Lopen because they haven't ever heard anyone else named that. I've asked around a lot, maybe one hundred...or two hundred...lots of people, sure. And nobody has heard of that name. ”

—Lopen introducing himself to Kaladin[5]

“Oh. Oh. Question for you! What did the one-armed Herdazian do to the man who stuck him to the wall?


Nothing. The Herdazian was 'armless.

—Lopen, after being stuck to a wall in a Full Lashing experiment that he himself proposed[11]

“Ain’t nothing wrong with being a woman, gancho. Some of my relatives are women. ”

“Life before death, strength before weakness, journey before pancakes ”

“Well, sure. Technically it might be. But for the end of the world, it's not so bad, right? I figured that when everything ended, we’d sink into a noxious bath of pus and doom, breathing in agony as the air around us—sure—became molten, and we screamed a final burning scream, relishing the memories of the last time a woman loved us. Don’t know about you, moolie, but my lungs aren’t burning. The air doesn’t seem very molten. Considering how bad this could have gone, you’ve got a lot to be thankful for. Remember that. ”

“NOW? I was saving that for a dramatic moment, you penhito! Why didn't you listen earlier? We were, sure, all about to die and things! ”

—Lopen to the Stormfather, when he achieved the Second Ideal of the Windrunners shortly after the Battle of Thaylen Field[2]

This article is still missing information. Please help The Coppermind by expanding it.
Retrieved from "https://coppermind.net/wiki/Lopen?&oldid=132553#Family"
Categories: