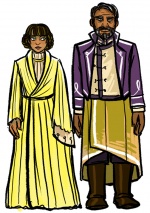 She is not purebred Alethi, as her hair is black with golden streaks, although she is a lighteyes with pale green eyes.

In the years prior to the True Desolation, her appearance matured somewhat, with her face being described as firm and lean. At some point she also began to wear her hair in a tail, and to wear boots with a utilitarian havah, a contrast from the fancier clothing she had worn previously. [3]

She was a childhood friend of Kaladin, and as they both matured she began to flirt with him,[4] though with the coming of Brightlord Roshone she turned to courting his son and heir, Rillir, and then eventually became betrothed to Roshone after his son's death.[1]

When Kaladin returns to Hearthstone in 1174, she berates him for damaging her floor with his shardblade, and for thinking she needed "saving" from her marriage to Roshone. She then helps him send a message via spanreed to Dalinar.[3]

This article is still missing information. Please help The Coppermind by expanding it.
Retrieved from "https://coppermind.net/wiki/?title=Laral_Roshone&oldid=80658"
Categories: