“The Origin is out there. This is the stormlands. Father says we're here to be a windbreak for more timid lands to the west. ”

Laral is a lighteyed woman with pale green eyes. Her hair, black with golden streaks, proves she is not purebred Alethi; she wears it long and for a while dyes it totally black.[2][4]

In the years prior to the True Desolation, her appearance matures somewhat, her face becoming firm and lean. She also begins to wear her undyed hair in a tail and to wear much more utilitarian clothing than the fancier clothing she had worn previously.[6]

While Hearthstone was occupied by the Fused, Laral wore a simple servant's dress, along with a gloved safe hand instead of a sleeve.[7] 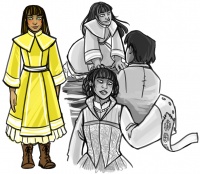 Laral was a childhood friend of Kaladin's while they grew up together in Hearthstone; they played together, and Kaladin often ate with her in the kitchens of her father's mansion.[4] As they both matured, she began to flirt with him and he began to return her feelings. One day, she, Kaladin, and Tien were out hunting lurgs when they noticed a group of boys congregating idly instead of worming the lavis polyps. Laral led Kaladin down to the others and thrust him into what was a very confusing confrontation for him, before returning home after Jost beat Kaladin with his quarterstaff.[2] Her father, who had been ill for several days,[4] died that day while he was tended to by Lirin.[2] Laral inherited the rest of Wistiow's wealth and was given a dowry by Highprince Torol Sadeas in lieu of the authority over Hearthstone and her father's old property.[4]

“You take after your father. Always feeling like you need to save everyone, even those who would rather you mind your own business.”

For several months after her father's death, Laral was confined to the mansion.[8] With the coming of Brightlord Roshone, she turned to courting his son and heir, Rillir. She began dressing as a true Alethi lighteyed woman in an effort to capture Rillir's attention, going so far as to treat Kaladin like an errand boy when the she and Rillir encountered him in the mansion's kitchen.[4]

Laral was at Lirin's surgery room with Rillir after he was gored by a whitespine, panicking and yelling before her guards took her away.[9] After Rillir's death from his wounds, she eventually became betrothed to Brightlord Roshone himself. She wore a bride's prayer glyph on her sleeve the day that Highprince Amaram arrived and took Tien and Kaladin into his army, though they did not formally announce their engagement at the time.[1]

When Kaladin returned to Hearthstone in 1174, Laral berated him for damaging her floor with his Shardblade and, more importantly, for thinking that she needed "saving" from her marriage to Roshone. She expressed willingness to help the citizens of Hearthstone weather the new everstorms and the lack of Parshmen, then operated a spanreed for Kaladin so he could speak with Dalinar before heading back to Urithiru.[6]

Laral conspired with Lirin to protect the Herdazian General known as The Mink, who was posing as a refugee. The plan is interrupted as Lezian arrives. Kaladin is revealed to be amongst the refugees, instigating a battle.[7] During the battle, Laral's home (the citylord's manor) is burned by Lezian.[10] Laral's husband Roshone is killed by Vyre within the manor.[5]

Laral is evacuated via The Fourth Bridge to Urithiru. Under Jasnah's new inheritance laws, Laral gained the title of citylady of Hearthstone, which entitled her to meet Queen Jasnah at Urithiru.[3]

Laral and Kaladin are friends while growing up together in Hearthstone, though as they grow older, she becomes Kaladin's first crush.[2][11] Kaladin's parents encourage him to play with her with the hope that one day they would marry. In the meantime, Laral herself encourages Kaladin to become a soldier and win a Shardblade so that, as a lighteyes, he could be her equal in a marriage.[12] When she moves on from him and becomes romantically involved with the Roshones, Kaladin has a difficult time accepting that she is doing so of her own choice.[1] 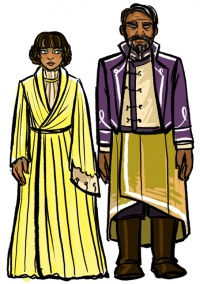 When Roshone was been given authority over Hearthstone, including possession of the mansion and surrounding lands, Highprince Sadeas gave Laral a dowry in compensation. Because of this, Roshone saw the need of marrying her into her family.[4] She was originally engaged to his son, Rillir, but after his death in a hunting accident, this engagement was made to Roshone himself.[1]

By the time of the True Desolation, Laral and Roshone had been married for several years. She claims satisfaction with the agreement and even defends him before Kaladin when he spoke ill of her husband. She seems to have used the marriage to become politically engaged and has strong loyalty from their soldiers.[6]

Laral and presumably Roshone's children were evacuated from Hearthstone and now reside in Urithiru.[3]

This page is probably complete!
This page contains most of the knowledge we have on the subject at this time.
It has yet to be reviewed.
Retrieved from "https://coppermind.net/wiki/?title=Laral_Roshone&oldid=160590"
Categories: