In the Physical Realm, honorspren look like windspren.[5] They can change their appearance, including forms like fire or clouds, although they always glow (but not illuminate), and are typically white-blue.[6][7][8] This being said, they generally seem to prefer a humanoid form. Usually, it's very small -- only about a handspan tall -- but if need be, a honorspren can make themselves as tall as a regular person.[5][9]

The more powerful their bond becomes, the stronger their variety, details, and hues of the form can be.[8] This includes being able to change their clothes to different colors, such as green or red.[10][11]

When their cognitive bodies are forced into the Physical Realm and they die, honorspren appear as a human with very pale skin and a blue cast to them.[12]

In the Cognitive Realm, honorspren are blue-white and as large as humans.[13] They appear to be wearing clothes, but the clothes are part of their essence and cannot be changed without Stormlight. Their clothing tend to range from military uniforms to flowing robes.[14] Their clothing style tends to correlate with their personal beliefs. Some honorspren buy physical clothes to wear instead.[15] Their hair, skin, and clothing all feel roughly the same as a human would.[14]

Honorspren may also buy real weapons to use.[16][14] They cannot vanish, or shape-shift.[1]

Honorspren have the ability to sense an upcoming highstorm days before it arrives.[17] This is likely related to their origins as Stormfather's children. They also have strong internal clocks.[10][18]

In the Physical Realm, they can use Adhesion to stick small, light objects together[19], and give pinches of energy or move small objects.[20][21] They can also shape-shift while in there, and choose who can and cannot see and hear them, although they cannot hide from their bonded Surgebinder, a Sighted,[22] or Lift.[23] Due to their ability to change size, honorspren can squeeze through small spaces, such as shutters or keyholes.[23][24]

They can form a Nahel bond with humans, turning them into Surgebinders with the powers of Adhesion and Gravitation. In return, they gain the ability to think and act like their Shadesmar selves in the Physical Realm.[25] Among the honorspren, the bond is considered extremely intimate, as it involves the mixing of souls.[4] Honorspren are always able to sense where their Surgebinder is, even if they are not awake.[26][23] They can also hear them over loud noises, such as rushing wind.[27]

With a powerful enough bond, honorspren and their Surgebinder are able to sense each others emotions, as well as communicate with their minds.[10]

During the Heraldic Epochs, honorspren were created by Honor.[4] At some point, inspired by the Heralds and their Honorblades, the honorspren, along with nine other types of sapient spren, began forming Nahel bonds with humans, giving rise to the Order of Windrunners.[28] Back then, they had a reputation for being discerning in their choice of who to bond with, more so than many other spren.[29]

Eventually, the honorspren grew into a large nation once more. Sometime in the recent past, they tried to conquer all of Shadesmar -- a failed attempt that left them with poor reputation among other sapient spren.[30] As a result, these days the honorspren keep to themselves, and it's dangerous for them to travel Shadesmar alone.[31]

Recently, Sylphrena was rediscovered, and brought back to the other honorspren. When she realized a new Desolation was coming, she escaped, leaving the city she's been staying at to enter the Physical Realm and find someone to bond with.[32][4] This caused the honorspren to post a huge reward for her return.[15]

After the True Desolation began, however, other honorspren started bonding with humans.[9] 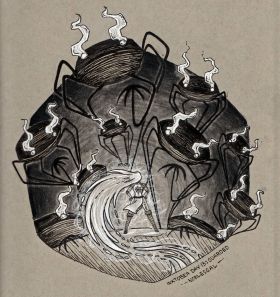 —Pattern, translating for an ashspren[15]

Honorspren are generally warlike and oath-bound, with a strong military tradition.[30] While fairly isolationist, they are willing to let other spren live alongside them, though it seems a non-honorspren cannot attain a high rank in their society. They believe themselves to be oathbound to follow Honor's path and serve what they think to be his interests. However, they are also highly respectful of the Bondsmiths, and the Stormfather Bondsmith in particular. The latter is likely due to many of them seeing the Stormfather as their parent or progenitor.[4]

Honorspren follow morality instead of a system of laws, and are stubborn in upholding their particular interpretation of it. It is difficult to change their mind with logic, as they focus on what they feel more than what they think.[4][33] Obedience, hierarchy, and order are highly valued in their society, and they're willing to put up bounties for their rebellious kinsmen.[9][15][34] This being said, honorspren pride themselves on not being as uptight as the highspren, and can be flexible when necessary.[4]

Of all spren, honorspren are noted to have the most human mannerisms.[4][14] They sometimes engage in grand hunts, tracking down and slaying other creatures of Shadesmar, like gloomspren.[35]

Honorspren are not liked by other types of sapient spren, and seem to avoid them in turn. In Celebrant, there are none on the streets.[15] Rather, they have their own cities, forming a grand nation with the capital in Lasting Integrity. They have several strongholds, including Unyielding Fidelity, in the reigon of Shadesmar corresponding to Kharbranth.[15]

According to Syl, while honorspren hate inkspren and highspren, they merely distrust Cryptics.[36]

The honorspren have a complex legal code that they require all parties involved to understand to at least a basic extent. Defendants are expected to carry their own case, and although they may receive legal counsel outside of the courtroom, lawyers are not employed by honorspren during trials.[37]

Defendants are permitted to talk during the trial, and during witness testimony, however, the judge can order them gagged at his or her discretion.[38] When permitted, the audience is allowed to ask questions of the defendant, but cannot make statements.[34] If a witness has been called who is too young or cannot be traditionally examined, the High Judge has the authority to question the defendant and speak on the witness’ behalf.[39] Proceedings are overseen by a High Judge, who is accompanied by a group of honorspren officials.[34] If the High Judge is unavailable, one of these officials can adjudicate in the High Judge’s place.[39]

A particular type of trial that is available under honorspren law is trial by witness. It is rarely used as it heavily favors the prosecution. This type of trial must be requested and approved by the judge preceding over the case. If the request is accepted, the trial is held in three parts, each on its own day, where multiple witnesses are brought forward by the prosecution, and the defendant is also allowed to present their case. On the first trial day, the prosecution will call three witnesses to speak against the defendant.[37] The second day of trial is for the accused to plead their case and the audience may ask them questions. On the third day, the prosecution can bring forth a final witness, whom the defendant can question, before judgement is made.[37][34]

This article is still missing information. Please help The Coppermind by expanding it.
Retrieved from "https://coppermind.net/wiki/Honorspren?&oldid=172582"
Categories: