Gereh's Aviar is an Aviar on Roshar. Formerly owned by Gereh, it was rescued by Lift and currently lives with her.[1] 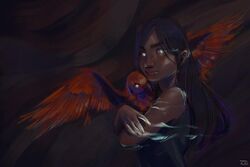 It is unknown how Gereh obtained his Aviar. He did not keep it with him commonly during his duties as a steward;[2] however, he did bring it with him during his everyday life in Urithiru. During the pair's stay there, Mraize murdered Gereh for unknown reasons. The Aviar of the Ghostbloods operative then attempted to kill Gereh's Aviar, mortally wounding it. Lift then chose to defend Gereh's Aviar and heal it, saving its life. She then helped the aviar find Gereh's corpse, only to be captured by Mraize upon arriving there.[3] During Lift's imprisonment, she lost track of the Aviar. After the occupation of the Tower ends, she manages to reconnect with the chicken and she and Wyndle take it in.

This page is probably complete!
This page contains most of the knowledge we have on the subject at this time.
It has yet to be reviewed.
Retrieved from "https://coppermind.net/wiki/?title=Gereh%27s_Aviar&oldid=166316"
Categories: