“I am afraid for the child. He begins to laugh happily. That will eventually be stolen from him again. ”

Gavinor spent most of his life in Kholinar with his mother, Aesudan. Little is known about his childhood before the Battle of Kholinar, when he was two or three years old. Jasnah Kholin currently rules as queen regnant, with Gavinor named as her heir.[1] 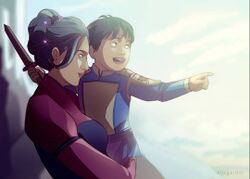 by Elisgardor
Being held by his grandmother

Gavinor is a small, two or three year old boy at the time of Kaladin, Elhokar, and Shallan's infiltration of the Kholinar Palace. He is found wearing a Kholin blue uniform, as well as holding a stuffed soldier that wears the same uniform.[4]

By the time Kaladin flies back to Alethkar after the battle at Thaylen City, Gavinor appears to be three or four years old, with chapped lips, haunted eyes, and is dressed in rags.[1]

After some time living in Urithiru, Gavinor is a healthy young boy, yet too small for his age and somewhat reserved.[5] He has dark hair and pure yellow eyes, and he carries a small wooden sword with him at all times.[6] 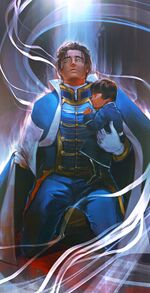 When Kaladin and Elhokar stormed the Kholinar Palace and found Aesudan in the royal chambers, Elhokar spoke with Aesudan while Kaladin went into the other room to look for Gavinor. Instead of playing with friends, as his mother had stated, Gavinor was being tormented by spren, so Kaladin summoned a Syldagger and killed one of the spren. Elhokar and Aesudan's conversation escalated to a full-scale argument, with Kaladin being able to hear every word they said from the other room. Kaladin tried to pick up Gavinor, but he screamed and scrambled away from Kaladin. Elhokar ran over and comforted his son. It is after this that Aesudan revealed that she was allied with Yelig-nar and Ashertmarn. Elhokar whispered something to his son, which made the boy stop crying and allowed his father to pick him up.[4]

During the fighting at the Kholinar Palace, Elhokar, holding Gavinor, was one word away from speaking the Immortal Words when Moash appeared and ran him through with a spear. Moash kicked Gavinor aside before dealing the final blow.[4]

Kaladin returned to Alethkar to rescue Drehy and Skar, who he left behind in the fighting at the Kholinar Palace. He found them near a dried out river, with the symbol of Bridge Four painted on a tarp. Drehy and Skar revealed a few servants they saved, as well as Gavinor.[1]

The trauma of his father's death had a long-lasting effect on Gavinor, with Navani noting that he treated even play as a serious occasion. He asked her if Dalinar could teach him to fight, so that he could kill Moash someday, to which Navani replied that she would ask him. Szeth expressed to Nightblood his fears that Gavinor had finally begun to laugh again and that, someday, the child would have that taken from him again. 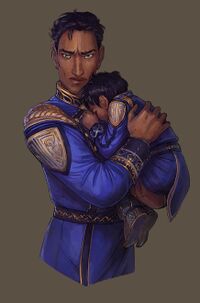 by Marie Seeberger
Gavinor held by his father

Gavinor is the son of Aesudan and Elhokar Kholin. Not much is known about his relationship with his parents. He spent most of his early childhood with Aesudan, as Elhokar was off fighting the War of Reckoning, although the two have met before -- possibly during Aesudan's visits to the Shattered Plains.[7] Elhokar seems to know how to take care of Gavinor, and knows how to calm the boy down when he starts crying.[4] Gavinor, in turn, cares for him dearly, swearing bloody revenge on Moash after his death.[5]

It's unknown how Gavinor used to feel about his mother. After Aesudan fell under the influence of Ashertmarn and Yelig-Nar, he grew scared of her and most other people.[4] That time left him timid, quiet and easily-scared, and it took over a year for him to become excitable and sociable again. He does not seem to feel as strongly about his mother's death as he does about his father's, though this might be because of the different manner in which she'd died.[5]

After Gavinor arrives in Urithiru, the rest of his family, including Adolin and Navani, take care of him; Adolin teaches him horse-riding, while Navani tries to spend time with him whenever she can. While it seems that doesn't happen very often, both of them enjoy each other's company, and Navani is very fond of the boy.[5]

Little is known about the journey of Drehy and Skar's small band of refugees who fled the city after the siege of Kholinar. However, it is apparent that Drehy and Skar were able to convince Gavinor to come with them, and after they have sacrificed so much to protect Gavinor and the rest of their band, it is likely that Gavinor trusts them.[1]

Gavinor wants to kill Moash to avenge his father; he asks Dalinar to teach him swordsmanship for this purpose. Apparently he was never told about reasons of his father’s death.[5]

This article is still missing information. Please help The Coppermind by expanding it.
Retrieved from "https://coppermind.net/wiki/?title=Gavinor_Kholin&oldid=158755"
Categories: