“Our interference so far has brought nothing but pain. My path has been chosen very deliberately. ”

Frost is a dragon from Yolen.[3] He is old enough to remember the Shattering, and has been corresponding with Hoid through letters.[4]

“Please, hearken to my plea. Leave that place and join me in my oath of nonintervention. The cosmere itself may depend upon our restraint. ”

The specific details of Frost's appearance are unknown. He presumably has the powerful shapeshifting abilities common to his race,[7] giving him the power to significantly alter his appearance. His usual appearance is presumably reptilian in nature.[4]

Frost has lived through significant events in the cosmere and has adopted a non-interference policy.[8] He's sarcastic and insulting towards Hoid,[9][5] although it is clear that their personal relationship is complicated.[10] 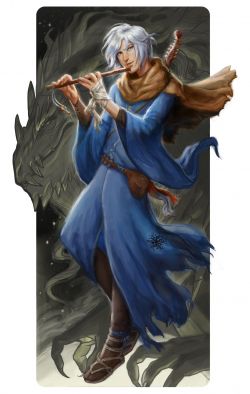 by Katie Payne
Frost With Hoid

Like all dragons, Frost is functionally immortal, meaning that he does not age, but he can be killed.[11][12] He is the oldest known character in the cosmere, even older than Hoid.[13]

Dragons are also known to have the abilities of flight[14] and shapeshifting, including the ability to appear human.[15]

While not a worldhopper, he is still highly knowledgeable about the cosmere.[16] He is associated with the Seventeenth Shard,[1] a group that shares his nonintervention policy.[17] He is able to keep track of current events in the cosmere through the Seventeenth Shard, correspondence, or other means. Among other facts, he knows that Hoid possesses a bead of lerasium from Scadrial,[18][19] that Odium is trapped in the Rosharan system,[20] and that a gemstone of Hoid's (presumably the First Gem) is "dead".[21] Despite the existence of an interplanetary "postal service", this was not the method Hoid and Frost used to exchange letters, meaning that they had some other means of contacting one another.[22]

Little is known of Frost's history even though he is truly ancient. He is slightly older than Hoid,[13] and both of them are known to have lived on Yolen. In their correspondence, Frost and Hoid seemed to know each other well, and Frost hinted that they had worked together in the past.[2] They also exhibited a shared personal knowledge of a number of the original sixteen Vessels who perpetrated the Shattering of Adonalsium on Yolen and took up the power of the Shards.[23][24] Specifically, the letters mentioned Rayse, Bavadin, Aona, Skai, Ati, and Tanavast by name, and Frost referenced "the sixteen".[25]

In Hoid's initial letter to Frost, it seemed that the two had not spoken in some time; Hoid was not sure if Frost was fully aware of the Splintering of Devotion and Dominion on Sel[26] even though several millenia had passed since that event.[25] Hoid begged Frost for his support, implying that Frost still had clout in the cosmere.[27] Frost rebuffed Hoid, emphasizing his nonintervention policy, and referred to their past actions as having caused more harm than good.[2] Although Frost seemed to agree with Hoid's assessment that Odium was dangerous,[28] he did not understand Hoid's level of concern[29] since Odium was trapped in the Rosharan system.[20] The two were diametrically opposed on the best way to save the cosmere, and Frost entreated Hoid to abandon his quest; he felt that this was the only way to ensure that Hoid would not make things worse with his meddling.[21]

This page is complete!
This page contains all the knowledge we have on the subject at this time.
Big Smooth (talk) 12:05, 24 June 2019 (MST)
Retrieved from "https://coppermind.net/wiki/Frost?&oldid=165011"
Categories: