She is described in Jak's books as being very gentle and loving. However, she has a harsher side as well. Handerwym claims that "any statement that lacks three curses — and a comment about Jak's questionable parentage — cannot truly be attributed to her." She also threatened to shoot Jak in the crotch if he did not include a certain line of hers in his book. Despite her strong words, she is very fond of Jak, much to Handerwym's confusion. 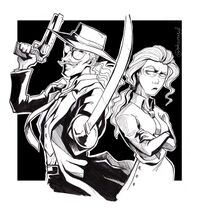 She is slim, has long hair, and wears glasses and bracelets. Jak himself describes her as being extremely beautiful, but it is uncertain whether this is an example of Jak's hyperbole. Her skin has a slightly blueish tinge due to her Koloss ancestry, but she covers this with makeup and gloves.[1] It is unknown if she hid her heritage from everyone or only Jak.[fn 1]

The reveal of her koloss blooded heritage in the penultimate episode of the Pits of Eltania almost caused riots in the street of Elendel. A special broadsheet containing the finale was released the next day as a result.[1]

This article is still missing information. Please help The Coppermind by expanding it.
Retrieved from "https://coppermind.net/wiki/?title=Elizandra_Dramali&oldid=165952"
Categories: