“Your Brightness Jasnah, she’ll undoubtedly be at the Conclave, you see. And the king lives there too. It’s the center of the city, so to speak. Except it’s on the top. ”

During the year 1173, Jasnah Kholin travelled to Kharbranth to access to the Conclave and the Palanaeum, in order to continue her research into the Voidbringers and Urithiru. Shallan Davar, who had been attempting to contact the Alethi princess for six months, arrived in Kharbranth part way through the year, relieved to find that she had finally caught up to Jasnah. Shortly after she arrived, a cave-in occurred within the palace following the Highstorm, trapping one of king Tarvangian's granddaughters inside one of the Conclave's many rooms. The scenario was deliberately planned by the king, who believed Jasnah may have been able to Soulcast without the use of a Soulcaster fabrial, to create a situation where he could observe her using Soulcasting. Believing that the fallen boulder needed to be removed as soon as possible and time was of the essence, Jasnah Soulcast the boulder into smoke, freeing Taravangian's granddaughter and allowing the king, as well as Shallan Davar who had recently arrived at the palace, the opportunity to witness her Surgebind. In exchange for her help, Taravangian granted Jasnah access to the Palanaeum, the grand library found deep within the Conclave, despite any backlash it would cause amongst the ardentia.[2][5][6] 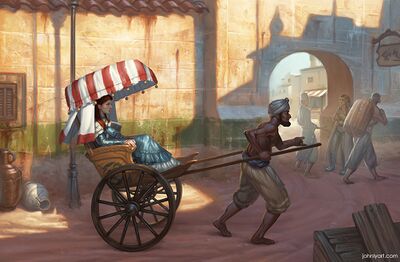 by John Ly
Shallan in Kharbranth, travelling to the Conclave

During her time in Kharbranth, Shallan struck up a friendship and potential romance with the ardent Kabsal, who she met while waiting to speak with Jasnah after the incident with Taravangian's daughter. The pair often spent time together around the Conclave, picnicking in the palace gardens and talking in the Palanaeum. Shallan also became quite well known amongst the Conclave staff for her drawing abilities, with many of the workers requesting portraits from the young scholar.[7][8][9][10]

While studying under Jasnah, Shallan Davar stayed within the residential suite of the Conclave, along with the Alethi princess. Shallan had travelled to the free city of Kharbranth under the guise of becoming the woman's ward, however, in truth she wished to steal Jasnah's Soulcaster. After several months of wardship passed, Shallan stole Jasnah's Soulcaster, switching it out for a fake copy while in their rooms within the Conclave. After being dismissed from her wardship, Shallan confronted Jasnah while she was in the Veil, concluding that the woman's soulcaster was a fake and also revealing that she herself could enter the Cognitive Realm and Soulcast.[7][11][12]

As the months passed while she studied, Shallan began to grow more and more aware of Pattern and the other Cryptics who watched her from the Cognitive Realm. Several times, Shallan unconsciously included them in portraits she created, first while sketching king Taravangian while he ate lunch in the Veil with Jasnah, and then later, in a sketch of herself and Kabsal after visiting the Palanaeum with the ardent. She also began hearing the Cryptics whispers, convincing herself that she was mishearing sounds made by the Conclave staff as they worked. Eventually Shallan was unable to ignore the spren and fled to her rooms to try and escape. Unfortunately for her, Pattern and the other Cryptics followed, leading to Shallan accidentally Soulcasting a goblet within her quarters into blood. To hide what she had done from Jasnah when the woman came to check on her, Shallan cut open her arm, pretending that the blood was hers and was taken to one of the city's many hospitals.[7][10][13]

Around the time Jasnah and Shallan end their stay at the Conclave and depart the city, Szeth broke into the palace with the intent to kill king Taravangian. After confronting the elderly man in his study, Szeth discovered that Taravangian was in possession of his oathstone and had been behind the assassinations that Szeth had been tasked with performing. Taking Szeth to the secret hospital, hidden within the Conclave, the king revealed that terminal patients and high risk citizens were being gathered in order to harvest the Death Rattles.[3]

Frequency in the number of Death Rattles begins to decline in late 1173 before ceasing completely in 1174 after Moelach departed the city and settled in the Horneater Peaks.[3] Despite this decline, and eventual cessation, of the Death Rattles, the hospital continued to operate after the departure of Moelach, as the potential for more Death Rattles outweighed the continued cost of human life.[4]

Following the coming of the Everstorm, the Palanaeum was inundated with requests from across Roshar, for information regarding the Voidbringers. Later the same year, a team of scholars working on the translation of the Dawnchant successfully translated the Eila Stele.[14][15]

Cave-in's, while rare, do occasionally occur within the Conclave following the Highstorm, due to the force of the storm against the mountain protecting Kharbranth. Care must be taken when clearing as to not trigger further collapses while clearing rubble.

No gate stands before the main entrance to the Conclave, which is painted white and carved into the rock face.[16][1] Squat metallic colored domes sit on the outcroppings over the entrance. It opens into a large, broad, and long rectangular hallway with polished stone pillars, as well as branching corridors and doorways to grand chambers set into the side walls.[1] The hallways are long and slope downwards into the mountain.[1] Lighting is provided from infused gemstones set into lamps, and the tinkling of bells can be heard throughout the building.[1][9] 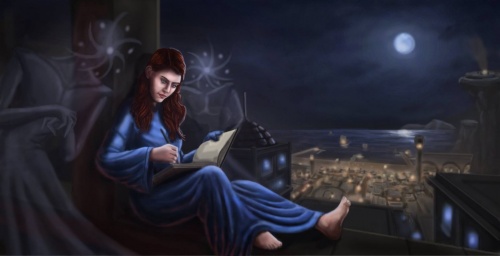 by Yoav Kozenyuk
Shallan Davar surrounded by Cryptics, looking over the city from the Conclave

The Palanaeum can be found, deep within the mountains and is approximately a thirty minute walk from the outside of the building.[9] It is set a long distance away from the residential guest suites.[10] How the Palanaeum was created is unknown, however, some believe that it was the work of the dawnsingers.[9]

A residential wing is available to house important guests during their stay in the city, and is guarded by two master servants who control access to the rooms and also provide assistance when required.[10] Spanreeds can be left with the servants to be monitored, who will inform guests when the fabrials are activated.[17] Heatrials can be found throughout rooms in the Conclave to provide heat and some rooms retain cave like aspects, with ceilings being intentionally left as rough stone.[11] The rooms are serviced by a number of maid's employed by Taravangian who are all carefully selected before being hired.[10]

Bathing rooms are available for guest use, with pools carved directly into the ground to create baths.[11] Heatrials can be found within each bath to heat the water, and are also used to preheat water before the bath is filled.[11] The Conclave uses a plumbing system to fill the baths, that utilises gravity to conduct water through its piping.[18] This set up has spread beyond Kharbranth and has become popular within the Alethi Warcamps.[18] Books from the Palanaeum cannot be taken into the Conclave bathing rooms.[11]

The palace gardens are accessible to guests as well as the Kharbranthian ardents. The fauna of the gardens is diverse, however, not to the extent that could be found in places such as Jah Keved.[17] Low stone walls are used in some of the gardens to create walls and provide privacy.[17] Taravangian can often be found in the gardens at midday, when he takes his daily walk.[10]

Taravangian's study is set against the outer rock face, with a large window set into the wall overlooking the city and out towards the ocean. Overfilled bookcases line the right wall, while two dozen lamps in a double row are on the left. A door in the wall of the room leads to a secret hospital hidden within the Conclave, not marked on on any of the palace maps. Railings running along the sides of the large room create a terrace look, and hospital beds take up the floor space. The room is large enough to hold several hundred beds, many of which are occupied by the sick and dying. Everything in the room is painted white.[3]

Those that are brought to the hospital are killed through exsanguination. This method is used as it is both slow and convenient, allowing for the recording of Death Rattles from those affected by Moelach. While it is preferable that only terminal patients are transferred to the hospital, the number of occupants is sometimes bolstered by high risk citizens. The ardent, Dova, oversees the collection of the Death Rattles and the hospital is staffed by the Silent Gatherers.[3][4]

This page is complete!
This page contains all the knowledge we have on the subject at this time.
LadyLameness (talk) 03:26, 21 June 2019 (MST)
Retrieved from "https://coppermind.net/wiki/Conclave?&oldid=130422"
Categories: