“The Lord Ruler is going to get me sooner or later. At least this way I get to spit in his face as I go. Overthrowing the Final Empire? It’s got style. ”

Cladent[2] is a skaa Misting from the Final Empire on Scadrial.[3] He is a member of Kelsier's thieving crew and goes by the nickname Clubs.

Clubs is generally a surly individual who often displays a grim and pessimistic demeanor. He has a gnarled face that's often compared to a piece of knotted wood. Upon first meeting others, he can come across hostile and untrusting. Although he appears to be older than Breeze, he is still physically fit. In spite of this, he walks with a limping gait. The source of which is a long twisting scar that runs up his calf and thigh, which he received during a skirmish while in the employ of the Lord Ruler[4][5] He generally regards those around him with disapproval, but viewed as loyal and trustworthy by Kelsier. He fiercely distrusts Soothers and Rioters due to their ability to manipulate peoples emotions. Even though he is immune to their allomancy, he stills see's both mistings as manipulative. However, he later comes to enjoy being around Breeze, to the point of drinking with him every night.[6]

To those that know him very well, Clubs is a man of rare understanding and humor.[7] When he smiles, it has a decidedly twisted look on his face. [1] 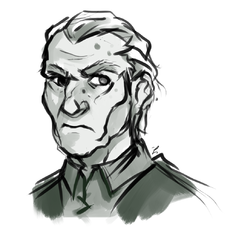 Being a Misting, Clubs is only capable of burning one of the Allomantic metals. He Snapped during his time in the the Lord Ruler's army, in his last fight, where he wounded and then discharged.[8] After snapping, Clubs discovered he was capable of burning copper. As a Smoker, Clubs is able to create a coppercloud around him that blocks the bronze sense of Seekers and Mistborn. This ability extends beyond himself, and allows others to use allomancy near him, without being discovered. Burning copper will also make him immune to any emotional allomancy.[9]

For nearly a year, Clubs acts as the general for Elend's military forces, and he is Kelsiers chosen team member to lead the assault against the Lord Ruler's palace. Clubs gained this military prowess and leadership during his time in the Lord Rulers army as an officer. It is unclear how many soldiers he led during his time, or how long he served there, but he has quite the knack for leading large groups of fighters.

Prior to joining Kelsier's crew Clubs worked as a master carpenter and was a Skaa merchant in Luthadel. His woodworking shop, which also operated base of operations and hideout for Kelsier's crew was known as a prominent Skaa Craftsman's shop.[2] Before this, Cladent worked as a soldier in the Lord Ruler’s army with some level command. During his time fighting in the southeast, he Snapped, becoming a Smoker.[10][8] After being injured and discharged, Clubs joined the underground. Once he opened up his shop, he employed several apprentice carpenters.[11] He 'adopted' his nephew, Spook, after he snapped and started showing signs of being able to use allomancy. He traded Spook's father a bag of coins in exchange for not killing him, and then took him back to Luthadel.[12] 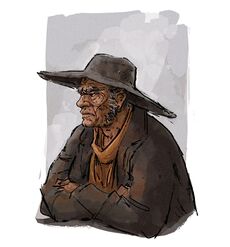 Once Kelsier's crew used Club's shop as a secret base of operations in Luthadel, he was tasked with maintaining a coppercloud around his shop to protect those inside from prying Seekers. He also serves as host for the crew, offering them a place to sleep, eat and bathe as needed. While essential to the crew, Clubs rarely leaves the shop as he is the crews primary Smoker, though he also employs many assistant carpenters who are also Smokers.[13]

The Skaa Riots & Death of the Lord Ruler[edit]

After Kelsier has been killed and the skaa begin to riot and fight back in his name, it is revealed by Renoux that Clubs was Kelsiers chosen crew member to lead the skaa in their direct attack on Kredik Shaw.[5] After the Lord Ruler was defeated, Elend appointed Clubs as the general of his armies.[14]

Clubs was not known to be a religious man, and so he disliked Captain Demoux preaching the Church of the Survivor to his troops.[15] Although Clubs came to befriend Breeze. The two often spent time in the evenings conversing and drinking at Keep Venture.

Before the Battle of Luthadel, Sazed tried to teach him about the religion of Dadradah, which focuses on art and craftsmanship. Sazed remarked that the care that Clubs devoted to his carpentry showed his true passion to be art, not warfare. As a token of the Dadradah faith, he also gives Clubs a small wooden disk carved with the image of a brush.[16] During the battle itself, Clubs ends up fighting at Zinc gate with Breeze nearby.[7]

He died during the Battle of Luthadel, killed by a koloss while saving Breeze.[17] Later on, Sazed found the wooden disk that he gave Clubs tied to the man's corpse.[18]

“I just wanted to show you what real carpenters are up to, old man. ”

Spook spent the majority of his life with Clubs. Being rescued by Clubs as a small child, Clubs was a father figure to Spook.[19] They had a peculiar relationship and once Spook gained confidence and began to grow out of his awkward boyish nature, he would often refer to Clubs as "Uncle Crusty."[14] Spook often worked as an errand boy for Clubs at his carpentry shop and generally liked to be close to Clubs[1] Before the Battle of Luthadel Clubs sent Spook away with Vin and Elend to find the Well of Ascension in the north. Clubs knew when he sent Spook with Elend and Vin, that he would never see him again, that he was saying "goodbye."[20]

—Clubs talking to Breeze about Soothers[6]

Clubs has a special relationship with Breeze, and one that had developed over time. Initially, Clubs did not like Breeze at all, and felt that he could not trust him. Feeling that Breeze was especially skilled at manipulating people.[1] Their relationship grew however, to the point where they began meeting together every night to share a drink and each others company.[6] During the Battle of Luthadel, Clubs saves Breeze from death by pushing him out of the way of a Koloss' sword, which resulted in Clubs nearly being cut in-two.[17]

“You must live as a soldier...But you can still dream like an artist. Here. I had this made for you. It is a symbol of the Dadradah faith. To its people, being an artist was a higher calling, even, than being a priest. ”

Initially Clubs and Sazed did not have much interaction, however; as time went on they began to spend more and more time together. During one of their final interactions before the Battle of Luthadel, Sazed suggests a religion for Clubs. He mentions that after a conversation about situational morality, he thought of the religion of Dadradah. Initially Clubs was not interested in hearing about the religion at all, but Sazed noted that the followers of Dadradah were artists, and that they believed that art drew one closer to God. Upon hearing this information, Clubs was more inclined to listen. Sazed noticed the care and skill that Clubs put into his woodworking in his shop, before the fall of the Lord Ruler. Sazed had a wooden disk of the symbol for the Dadradah faith made for Clubs, which Sazed later found clutched in his hand after he had been killed by the Koloss.

This page is probably complete!
This page contains most of the knowledge we have on the subject at this time.
It has yet to be reviewed.
Retrieved from "https://coppermind.net/wiki/Cladent?&oldid=171189"
Categories: