, romanization: Kezeras)[1] is a massively Invested hurricane on the planet of Roshar. They occur once every few days, or at the command of Stormfather, and move from stormward to leeward (East to West), starting at the Origin.[2] East of Roshar, the highstorms are incredibly destructive. They progress across the continent, though they weaken gradually as they cross, and are mostly broken by the mountains east of Shinovar.[3] This weakness is caused by a combination of being over land instead of water, and infusing spheres with Stormlight.[4]

by Noah Bradley
A stormwall
For more images, see /Gallery.

A highstorm has three general stages. The leading edge, or stormwall, is the most dangerous part of the storm. Immensely powerful winds generate a wall of dust, water, and larger debris.[5] It is shown that it is powerful enough to carry large trees long distances into the Shattered Plains.[6] The main body of the highstorm carries less debris, although the winds are still strong enough to hurl boulders. The trailing edge of the storm, known as the riddens, consists of light rains mixed with relatively mild gusts of wind.[7] On average, a highstorm travels at roughly 370 miles per hour,[8] and weakens as it moves across the continent; the Purelake, for example, experiences less intense highstorms than areas to the east.[9]

There is natural cyclical variation in the height of highstorms. At times it barely reaches Urithiru in the mountains, and at other times it is taller than the tower.[10][11]

When a highstorm and the Everstorm hits a location at the same time, the combined power of the storms can cause even greater destruction than normal, destroying the land below them with enough force to send boulders flying hundreds of feet up in the air.[12]

On the Rosharan subastral of the Cognitive Realm, highstorms manifest in a non-violent manner, in contrast to its form in the Physical Realm. Instead of powerful winds and rain, the sky would simply light up,[13] the clouds shimmering with a mother-of-pearl iridescence.[14]

“There was no lightning, no wind, no rain. The silence was unnatural. ”

Some unlucky travelers who have been caught in a highstorm have spoken of a moment that occurs within the heart of the storm when the winds suddenly die away and everything becomes still for a brief moment, defying explanation. Termed the "centerbeat" by multiple cultures, scholars seem to lack scientific evidence of its existence.[15][16] Kaladin experiences an unnatural stillness in the middle of the highstorm when he first sees the Stormfather.[7] He experiences a similar sensation when he is stuck in the chasms of the Shattered Plains with Shallan.[17]

This is caused by the bringing to bear of large enough quantities of Stormlight that time and space distorts and the three realms are brought closer, and the Stormfather can appear and speak to people through this mechanism.[18] 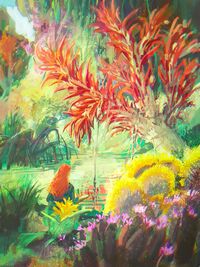 Stormwardens try to predict when highstorms occur,[19] and have become somewhat accurate, though not always.[20] The Stormwardens have poor reputations since predicting the future is forbidden under Vorin doctrine.

Vorin mythology claims that each storm is born in the east at the Origin before traveling west across Roshar, but modern Stormwardens believe there exists a single highstorm that travels around the planet, with the length between storms decided by the speed it travels during that time of year.[21]

Highstorms are the single most important force in Roshar's ecology, and life on the planet has adapted to them. Some plants, like lavis polyps, enclose themselves against the highstorm's fury; others retract or fold their relatively fragile leaves, vines, or roots away. The east side of hills is more barren since it directly faces the blow of a highstorm. Contrarily, life flourishes on the west side of hills or landscapes such as valleys, where they are shielded from the powerful winds.

Another effect of a highstorm is the crem in the storm water. This substance is deposited onto the land, accumulating over the millennia, even prior to the Shattering.[22] It is currently unknown where crem comes from, but it partly contains minerals that are useful for plant life. Stormwardens have discovered that Stormwater is better for plants on Roshar than regular water, with crem providing nutrients that would otherwise be provided by soil swept away by the highstorms.[23] Many plants have outer coverings infused with highstorm crem, forming protective shells.[24]

For Roshar's native sentient species, the singers, highstorms are a crucial part of their life cycles. Entering a highstorm allows them to bond a spren, changing their body into one of the dozens of specialized forms. In the past, this was done simply by entering the storm with a specific mindset; in the current day, the singers trap a spren in a gemstone beforehand and await the storm with it at the ready.[25] 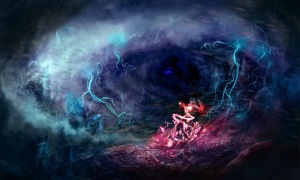 by Casey Fallon
A singer transforming in a highstorm

People on Roshar live in cities and settlements that are protected from highstorms by natural or manmade structures. Kholinar has its windblades[26]—large stone formations that divert the highstorm's force— and Sesemalex Dar has troughs that prevent the city from flooding.[27] These structures are often city-wide and become an integral part of the city's culture.

Other aspects of civilization are also affected by the highstorms. For example, sanitation regulations have been developed to prevent the trash of one town from being blown by the strong winds towards the next town. These regulations, however, do not apply on the Shattered Plains due to its isolated location, and so the refuse and litter of the Alethi warcamps there are piled high to be carried away during each highstorm.[28]

Many curse words and insults are related to the highstorms, but they are also a target of reverence. The Stormfather is venerated by many. Some folklore traditions equate the Stormfather with the Herald Jezerezeh. Criminals have been known to be punished by being strung up outside during a highstorm in order to be "judged" by the Stormfather, who supposedly would let them live if they deserved it.[5] 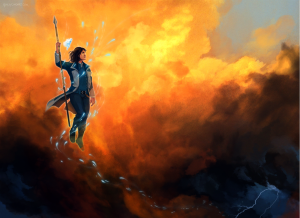 by Ashley Coad
Kaladin floating over a highstorm

Highstorms are highly Invested,[29] and are the primary source of Investiture on Roshar. Gemstones are infused with Stormlight when left outside during a highstorm, though this only happens in the Physical Realm.[23][30] This magical source of illumination and power is used to Invest fabrials and fuel Surgebinding. If they are within about a hundred feet of a highstorm,[31] The Investiture provided by the storm only functions when it is "whole", and it cannot split pieces off to reach into sheltered places, such as inside buildings.[10] Surgebinders can gain Stormlight directly from the storm, instead of using gemstones as an intermediary.[12] The strength of the storm is not tied directly to the amount of Stormlight Invested into gemstones.[32] Highstorms predate the Shattering of Adonalsium,[33] though they have been significantly altered from their original form by certain events,[34] likely the Shattering itself, as well as both the arrival and Splintering of Honor.

Because of the strong winds, windspren are especially numerous during storms. Rainspren sometimes appear during the light rains of the riddens. More recently, stormspren have also started appearing.[42] There have been sightings of gigantic glowing spren striding through the land during highstorms.[43][17] They have been described as sleek, moving on spindly legs.[44]

In the Cognitive Realm, sapient spren appear to act more energetically during highstorms, and it has been speculated that they get their sustenance from it.[14]

This article is still missing information. Please help The Coppermind by expanding it.
Retrieved from "https://coppermind.net/wiki/Highstorm?&oldid=170926#Centerbeat"
Categories: