Brightlord Avarak Matal is a lighteyed officer in the Sadeas warcamp on the Shattered Plains of Roshar. He is the captain of the Sadeas bridge crews, although his wife Hashal seems to exert more authority than he does.[1]

He is nearly as tall as Kaladin, but he is spindly with delicate hands. He wears a sword at his side, but Kaladin believes that it is mostly there for fashion. He and Hashal consider themselves close associates of Torol Sadeas, and are presumably of a fairly high dahn.[1] 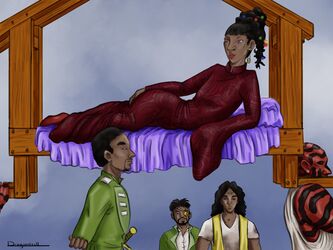 by Dragontrill
With his wife, inspecting the bridge crews

Matal was made captain of the Sadeas bridge crews after Lamaril's execution following the disastrous "side carry" battle.[1] Matal's wife Hashal claimed that he had asked to be assigned the captaincy of the bridge crews in order to see to it that they were run smoothly and efficiently; Kaladin assumed this was a fabrication since the position was not prestigious.[1]

Matal rarely addressed the crews directly, instead allowing Hashal to deal with them using his authority.[1][2] He rarely spoke when Hashal was present, and only took personal command on the battlefield where women were not allowed; for example, he would give the bridge crews orders to form up and run before a plateau assault.[3]

Success on the Battlefield, Tanatev 1174[edit]

During a Sadeas plateau run, Kaladin attempted to divert the attention of the Parshendi from the bridge crews by dressing in singer remains and using himself as bait. Matal screamed loudly at Kaladin when he realized something unexpected was happening since Kaladin's previous attempt at innovation had resulted in Lamaril's execution. Kaladin's covert use of Surgebinding allowed the risky strategy to succeed, and the crews suffered almost no casualties. Torol Sadeas approached after the battle and Matal assumed he would be angry; to his credit, he took responsibility for Kaladin's actions. However, Sadeas assumed that Matal had approved the plan beforehand and was pleased that his risk paid off, stating that he would likely be compelled to give Matal a promotion. Matal was extremely angry at Kaladin for putting his life on the line, but did not discipline him since he knew he could not afford to lose him.[4]

Matal later gave Kaladin and Bridge Four permission to leave Shen behind on bridge runs due to his foul temper and behavior after he saw how they were treating the corpses of the Parshendi.[5]

Battle of the Tower, Tanatash 1174[edit]

Matal was later seen shouting orders when the horns sounded before the Battle of the Tower.[3] During the battle, Matal stayed back from the fighting. Kaladin saw him speaking to the rear guard across the chasm from Bridge Four's position. Confused by Matal's actions, Kaladin realized that Sadeas planned to betray Dalinar and the Kholin army by retreating and abandoning them.[6]

After retreating from the battle, Matal directed the bridge crews back towards the Sadeas warcamp. Kaladin and Bridge Four lagged at the rear of the army, drawing Matal's ire. Kaladin told Matal that his men were tired, and convinced him to allow them to follow at their own pace since they had their own bridge to cross with; he secretly hoped to desert the army. Matal agreed, thinking that their slow pace would cause them to be hunted down by Parshendi and he would be rid of Kaladin.[7] Bridge Four was ultimately able to rescue Dalinar and many of his men.[8]

After the battle concluded, Kaladin observed Matal furiously focusing on Bridge Four while the highprinces debriefed. Kaladin assumed that Sadeas would have Matal executed, based on Lamaril's fate.[9]

This page is complete!
This page contains all the knowledge we have on the subject at this time.
Big Smooth (talk) 18:29, 28 December 2021 (UTC)
Retrieved from "https://coppermind.net/wiki/?title=Avarak_Matal&oldid=163885"
Categories: