The Apocalypse Guard is a planned YA trilogy. Originally planned to connect to the Reckoners Multiverse, it may also connect to the Cytoverse, or possibly neither one if it does not make sense to do so.[1] After initial drafts did not work out, it was put on indefinite hold[2] but has subsequently seen additional development by Brandon and coauthor Dan Wells.[3][4] 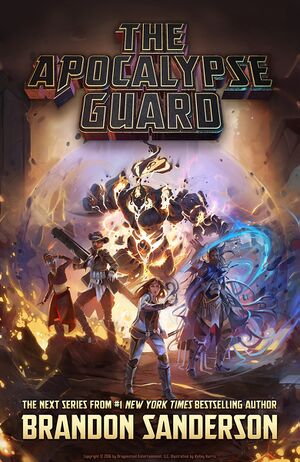 Emma is an intern for the Apocalypse Guard, an organization that travels through the multiverse to avert world-ending events. While dealing with one of these threats, the Apocalypse Guard itself is attacked and Emma lands on a planet shortly before it will end. She must either find a way off-world or put the Guard's plan into action with no training, no powers, and only one guy for tech support.[5][6]

Emma
The main character. She's a summer intern at mission control for the Apocalypse Guard when it's attacked. As a result, she's thrown into a doomed world and must find the Guard or another way off the planet before it's destroyed.[7]

Zoba
An entity that appears to be made of stone and fire.[8]

Oracle
A human woman serving on an Apocalypse Guard team.[9]

The Apocalypse Guard takes place in a multiverse where only a fraction of all worlds are stable, with the vast majority being mere possibilities. Unfortunately, these stable realities are constantly facing world-ending events. The Apocalypse Guard is an organization of scientists, engineers, and individuals with extraordinary abilities dedicated to creating and enacting plans to avert these events if possible, or evacuating the planet if not.[7]

Emma lands on a world surrounded by an envelope of water in imminent danger of collapsing and flooding the planet. The idea was inspired by the firmament, the biblical concept of a vast dome separating "the waters above" (in the sky) from "the waters below" on Earth.[6]

Brandon has indicated that the series may connect elements from the Cytoverse and the Reckoners Multiverse, but that getting the book right and allowing it to stand on its own takes precedence.[1]

Brandon first mentioned the series at the release party for Shadows of Self.[10] It was then obliquely referenced in the 2015 State of the Sanderson as a "New YA Series".[11] Brandon then officially announced the project in 2016, and revealed concept cover art.[7] After the completion of Oathbringer in June 2017, Brandon began the first draft of The Apocalypse Guard, planning on writing the full trilogy straight through before the release of the first book, something he had not been able to do since Era 1 of Mistborn.[12]

Publishing rights were originally acquired by the Random House imprint Delacorte Press (also the publishers of The Reckoners).

“The Apocalypse Guard series is set in a world parallel to that of the Reckoners, and an organization of superpowered individuals is at its center. Their collective objective is to save doomed planets, until the day something goes horribly wrong and it is up to one young member of the guard to fix things before time runs out for her and the planet she calls home.


Publication of the first book in the series is planned for mid 2018.

Brandon announced the completion of the first draft of the first book on September 1st, 2017.[14] While working on the second draft, and in conversations with his editor, various issues with the book were found. While Brandon initially attempted to revise the book to fix these issues, he felt that the changes were instead making the book worse, and so he decided to shelve the project as he did not believe he could fix it in the time required for a 2018 release.[15] After Brandon pulled the book, he still needed to complete a project for Delacorte/Random House, which led to him prioritizing work on the Skyward series.[15][16]

At the release party for Oathbringer, Brandon announced that Dan Wells—a close friend and fellow member of Writing Excuses—would be collaborating with him on The Apocalypse Guard going forward.[17] Brandon planned to give Dan time to alter the books as he saw fit before returning to collaborate with him on the final version.[18] One of the structural changes made by Brandon and Dan was the removal of one of the magic systems they had considered "foundational to the story".[19] As the revisions continued, the book "got weirder".[16] By late 2019, Dan had finished a revision that Brandon described as "pretty good", but neither of them was totally satisfied with the result and the project was shelved indefinitely.[20] In December 2019, Brandon said he had no immediate plans to try to make the book work, and that it might be dead.[2]

In March 2020, Brandon indicated that he might have figured out how to fix the remaining problems, and was planning to try to work on the book, along with Dawnshard, after he finished revisions for Rhythm of War.[3][4] Dawnshard ended up being much longer than expected[21]; the current timeline for publishing The Apocalypse Guard would be sometime after Skyward 4.[22]

If the first book works out, there would likely still be sequels, as Brandon has enjoyed working with Dan.[23]

This meta article is still missing information. Please help The Coppermind by expanding it.
Retrieved from "https://coppermind.net/wiki/?title=The_Apocalypse_Guard&oldid=146206"
Categories: