From The Coppermind
Revision as of 10:33, 29 July 2019 by LadyLameness (talk | contribs)
(diff) ← Older revision | Latest revision (diff) | Newer revision → (diff)
Jump to navigation Jump to search
This page or section needs to be updated with new information for Oathbringer!
Be aware that in its current state, it does not include this additional content yet.

Alethkar is the largest and most prominent of the five Vorin nations on Roshar. It is split into ten princedoms, each with its own highprince. People from Alethkar are known as Alethi. Prior to the True Desolation, Alethkar was engaged in the War of Reckoning against the Parshendi. According to offical records, Alethkar possesses more Shardblades than any other nation on Roshar; with Jah Keved have reportedly having the 2nd most Shardblades.[1]. Several princedoms and cities, including the capital, are currently under the control of the Voidbringers. 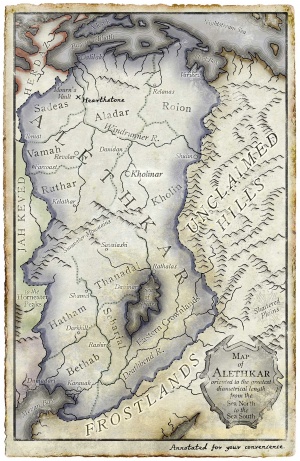 Map of Alethkar by Isaac Stewart. Alethi territories (barring the Shattered Plains) are marked in purple.

Alethkar lies in eastern Roshar, stretching across the entire continent, from the Steamwater Ocean in the North to the Tarat Sea in the South-West. To the East, it leans on the Unclaimed Hills, while to the South, it reaches the nationless Frostlands and the Shattered Plains, the latter of which it has recently claimed for itself. In the West, Alethkar has a long and long-disputed border with Jah Keved, which currently follows two rivers and the bend of the Sunmaker Mountains. In North-West, Alethkar borders Herdaz across a stretch of land decided through a few years of border wars.[2][3]

Besides the mainland, the Alethi have a number of territories off the coast. On the Steamwater Ocean, Alethkar has Akak and a number of surrounding islands, giving it complete control over the Bay of Elibath. On the Tarat Sea - more specifically, a region of it called Mevan Bay - it controls a number of small islands in the delta of Deathbend River, near the city of Karanak.[4]

At the tail end of the Era of Solitude, Alethkar is the largest state on Roshar, covering around seven million square kilometers of land.[5] Despite the fact that it is far more exposed to the highstorms than any country further West, large swathes of it are lush with animals and vegetation.[6] It has numerous rivers crossing it, the two major ones being Windrunner and Deathbend. The Windrunner River runs East to West, from Unclaimed Hills to the Bay of Elibath, and has numerous tributaries across the northern half of the country. The Deathbend River likewise starts in the Unclaimed Hills, though it turns South, ultimately ending in the Mevan Bay, with one of its major tributaries being an enormous lake called the Sea of Spears. The North and South of Alethkar are divided by a long, cross-shaped masiff called the Sunmaker Mountains.[4]

Alethkar was founded as Alethela in the Silver Kingdoms Epoch. It survived the Desolations, but fell under the sway of the Hierocracy until the Sunmaker led the kingdom in a successful revolt against the Vorin rule. After the Sunmaker's death, his ten sons could not agree on one of their number as his successor. With none of them willing to forego their claim to the throne, they split the kingdom into ten princedoms, which they ruled individually as Highprinces, with no unifying government.

Several centuries later, in approximately 1158, Gavilar Kholin--inspired by the Sunmaker--sought to conquer and unite the highprinces, which he achieved by about 1163. He was then crowned king and his brother Dalinar Kholin became highprince to the Kholin Princedom. Hower, due to the lineage of each Princedom going back to the Sunmaker and his sons, the Highprinces were loathe to surrender their autonomous power to a supreme ruler. The integrity and unity of Gavilar's kingdom is therefore questionable, as evidenced by the ferocity with which the Highprinces resisted his military approach to unification and continued to strain against his rule. The most severe instance of this was the rebellion in Rathalas, where Gavilar eventually had to send troops led by Dalinar and Sadeas in order to quench the revolt, as political means had resulted in a failure.

When Gavilar was assassinated by the Parshendi in 1167[7], his son Elhokar Kholin became king and declared war on the killers. Each of the highprinces joined the Vengeance Pact and they set out into the Shattered Plains to besiege the Parshendi in the War of Reckoning. However, the siege took much longer than was expected, and was still active by 1173. It eventually ended when the Parshendi summoned the Everstorm, beginning the True Desolation during the Battle of Narak. Afterwards, some of the Highprinces -- Dalinar, Aladar and Sebarial -- along with their remaining forces, took refuge in Urithiru, while others remained on the Shattered Plains, slowly taking over the abandoned warcamps of those who left and consolidating their power base there.

Meanwhile, the Alethkar homelands were besieged by the newly awakened singer forces led by the Fused, culminating in the siege and eventual fall of Kholinar.

After Elhokar was killed by Moash during the siege, and Adolin Kholin refused to take the throne after the Battle of Thaylen Field, Jasnah Kholin became Queen. The current heir to the throne is Elhokar's son, Gavinor -- however, he's still a child and a regency in his name was deemed too unstable and dangerous during the time of the Last Desolation.

The Alethi culture is divided into two major castes, the lighteyes and darkeyes. The distinction between the two is the coloring of the person's eyes, the lighteyes standing as the upper caste, and darkeyes as the working/lower caste. Each of these castes are further divided in rank according to their dahn (in the case of lighteyes) or their nahn (in the case of darkeyes). There are many ways for a person to improve their ranking and it is hereditary. Many darkeyes volunteer to become soldiers for the chance to increase their rank and that of their children. Children of pure light/dark-eyed parents always breed true, whereas the children of mixed descent have the chance to be either.

The Alethi system of government revolves around class. The lighteyes compose the ruling upper caste, which also has a ranking system (dahn). The Alethi monarch is the highest ranked lighteyes and rules over the highprinces. Next in line in terms of prestige and power are any lighteyes who were also Shardbearers, with significant overlap into the princedom (i.e. many highprinces are generally Shardbearers as well). The darkeyes make up the working class. The majority of darkeyes are either farmers or soldiers, both of which are considered to be high Callings in Vorinism, and admirable professions. Many darkeyed soldiers who go to war hope to defeat a Shardbearer in combat to gain ownership over their Shardblade as it is believed that this will change the color of their eyes and they will become a lighteyes themselves. War and honor are considered a way of life to the Alethi.

The word Mathana is a formal term for an older sister,[8] and for "aunt" it is Mashala.[9]

Most of the Alethi are Vorin, followers of the Almighty. The priests of Vorinism are called ardents and are divided into Devotaries. Vorinism has a large impact on the culture of Alethkar. Alethi each chooses a profession and an attribute of the Almighty to emulate: a Calling and a Glory. These can be changed during life but it is generally frowned upon culturally. Soulcasting is considered sacred to the Alethi and so only the ardents are permitted to use Soulcasting fabrials. 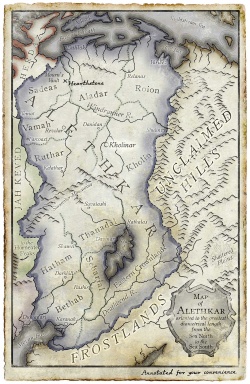 Though it is ruled by a single king, Alethkar is divided into ten princedoms, each ruled by a lighteyed highprince. Each princedom is named after the family controlling it, and each has its own military, independent of one another - a remnant of the times prior to the reunification. While the highprinces do work together, the king has limited control over them, maintained less through tradition, and more through sheer military power and access to amenities like Soulcasters.[10] In addition, the ruling House Kholin controls the largest territory, as apart from their own princedom, they also hold an underpopulated stretch of land called the Eastern Crownlands.[4]

The territories of Alethkar and their major settlements are:

Kholin princedom
In the east of Alethkar

Sadeas princedom
In the north-west of Alethkar

Aladar princedom
In the north of Alethkar

Roion princedom
In the north-east of Alethkar

Vamah princedom
In the north-west of Alethkar

Ruthar princedom
In the west of Alethkar

Thanadal princedom
In the center of Alethkar

Hatham princedom
In the west of Alethkar

Bethab princedom
In the south-west of Alethkar

Sebarial princedom
In the south of Alethkar

The modern Alethi army is one of the strongest military forces on Roshar with well over 100,000 troops[11] and over thirty Shardbearers.[12] The army employs most of its troops as spearmen and archers, as well as a very small amount of cavalry due to the rarity of horses on Roshar;[11] only the officers wield swords because, according to Vorin traditions, the sword is regarded as a lighteyed's weapon.[7] Soldiers are usually trained in one or two additional Skills, i.e. horse grooms.[13] Under most circumstances, military service is voluntary, though the leaders of the army has the right of conscription for darkeyes that do not provide an essential function to a community (e.g. a town's only surgeon) when they feel there is need for additional troops.[14] It is extremely rare for a darkeyed soldier to rise higher than the rank of squadleader.[15] Lighteyed officers that have the command of a branch of the army are usually referred by their duties (e.g. cavalrylord, infantrylord).[16]

Despite Alethkar being a monarchy, the king has very little actual say in how the military is run and does not directly command any force other than the 250-strong King's Guard. The troops are sworn to and led by their individual highprinces.[12] In that sense, Alethkar army is not truly a unified army, but a loose coalition between ten smaller armies. Indeed, even in wartime, there is constant in-fighting between the highprinces' armies,[15] and cooperation between the highprinces themselves is seen as a weakness;[17] this is bolstered by the tenets of Vorinism that say the purpose of life is to prepare in order to join the Heralds in the fight to regain the Tranquiline Halls and Alethi belief that everything is a competition in life.[10]

Because of the immense size of the army and the difficulty of travel, Soulcasting plays a vital role in supplying the army with wood, metal, food, and many other necessities, as well as being used in building fortifications. The king controls most of the Soulcaster ardents; in fact, manipulating the highprinces with his Soulcasters is one of the ways that the king maintains a control over them.[10]

Recently, in an effort to truly unify the kingdom, Dalinar Kholin has been appointed as the Highprince of War by the king. This title was used in Alethkar before being fragmented into ten princedoms when each highprince was given the ultimate authority over one aspect of the governing of the kingdom. On paper, this gives Kholin authority over all war-related activities.[18]

For a list of all Alethi characters, see :Category: Alethi.

This article is still missing information. Please help The Coppermind by expanding it.
Retrieved from "https://coppermind.net/wiki/Alethkar?&oldid=107069"
Categories: