Alcatraz Versus the Evil Librarians (series)

This article is about Brandon Sanderson's series. For the character, see Alcatraz Smedry.

Alcatraz is a middle-grade series by Brandon Sanderson. It currently consists of 5 books told from the point of view of Alcatraz Smedry, a young boy and heir to House Smedry.

The end-node to The Dark Talent includes a letter penned by Bastille, in which she states that there would an additional book written from her perspective in order to tie up everything properly. The tentative title for this last book is Alcatraz Bastille versus the Evil Librarians: The Worldspire.[1] Brandon had some trouble getting Bastille's voice right, so he reached out to his long-time friend and former student, Janci Patterson, who agreed to help with the book.[2] After that, the two made "significant progress," and the book is almost done.[3][4] 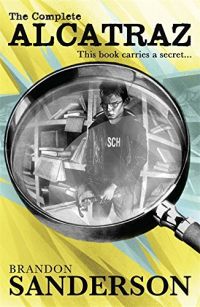 The Complete Alcatraz, a UK omnibus of the first two books
Alcatraz versus the Evil Librarians · The Scrivener's Bones · The Knights of Crystallia · The Shattered Lens · The Dark Talent

This meta article is still missing information. Please help The Coppermind by expanding it.
Retrieved from "https://coppermind.net/wiki/?title=Alcatraz_Versus_the_Evil_Librarians_(series)&oldid=123422"
Categories: