Aesudan Kholin is the queen regent of Alethkar during the reign of her husband, King Elhokar Kholin.[2] She manages the kingdom in her husband's absence, while he fights the Parshendi on the Shattered Plains during the War of Reckoning. 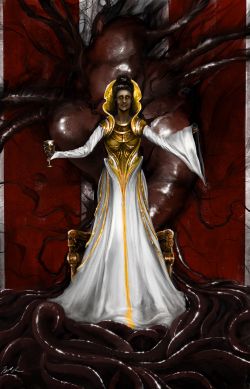 by Kyle Pearson
With Ashertmarn

According to Navani, Aesudan is politically competent,[3] though she is not a terribly nice person. She acts like Navani to make her uncomfortable,[4] and she also laughs at Dalinar Kholin when he is drunk during the treaty signing party.[2] She is also incredibly out of touch with her people, living a life of excess while her people suffer.[5] The canceling of the Beggar's Feast exemplifies how little she cares for the common people. The throne easily has enough resources to continue the tradition, but Aesudan does not seem to care.

For some reason, Aesudan is under the impression that the Almighty is displeased with her.[5] In order to gain his goodwill, she surrounds herself with many ardents, to whom she provides a vast array of luxuries: the finest foods, art, horseback riding, and leisure time. In return, the ardents promise her that living her life of wastefulness is the right thing to do, leading to an even greater disconnect between her and her people.

After becoming the host of Yelig-Nar, Aesudan believes her corrupted guards to be Radiants despite fully understanding the presence of an Unmade within her. It is unclear how much she actively cooperated with the forces of Odium and how much they control her.

Aesudan married Elhokar some time before his ascension to the throne of Alethkar. Little of her life prior to that was known. As a princess of Alethkar, she attended the treaty signing feast with the Parshendi on the night that King Gavilar Kholin was assassinated by Szeth.[2] On that same night, prior to the king's death, Jasnah Kholin met with Liss, an assassin that she had hired as one of Aesudan's maids. For unknown reasons, Jasnah instructed Liss to observe Aesudan and report back on her actions, but not to assassinate her unless Jasnah ordered it. Ultimately Jasnah decided against that, but her reasoning remains unclear. Elhokar later stated that his sister had spoken out against his decision to marry Aesudan in the past, and that she'd claimed Aesudan was too power-hungry. Elhokar, however, just took it for strength.

She was present at the private ceremony for Gavilar's interment.[6] 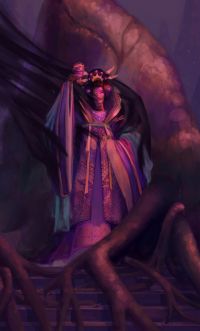 by Soph Peralta
Under the influence of the Unmade

When Elhokar ascended to the throne of Alethkar, he was immediately forced to leave Kholinar to fulfill the terms of the Vengeance Pact in what became known as the War of Reckoning. This left Aesudan ruling as regent on the throne of Alethkar.[8] The king's mother, Navani Kholin, remained behind to advise Aesudan in her duties. However, Navani made the judgement that Aesudan is sufficiently skilled to rule on her own, and left her for the Shattered Plains.[3]

However, either Navani made a crucial misjudgment or the Unmade corrupted Aesudan after Navani's departure, because Aesudan inadvertently began to turn the populace against herself.[5] She threw lavish feasts, reveling in excess, and allowed food sent in by starving farmers for the soldiers on the Shattered Plains to simply rot away. She also canceled the Beggar's Feasts. This was perhaps due in part to her sycophantic ardents who simply told her that she was always on the right path. However, one of the ardents assigned to her retinue, a young woman named Pai, refused to look past the queen's flaws and performed an act of civil disobedience. She went before the Common Throne of the People's Hall and inked the glyphs of the ten foolish attributes before the Throne, as well as a paragraph beside each glyph, explaining how Aesudan exemplified each of these traits, denouncing not only the queen but the government itself. Pai was executed, but Kholinar erupted in riots the next day.[9]

Following the summoning of the Everstorm and the rallying of a Voidbringer army, Kholinar was surrounded by Fused and Singers, who used spren to locate and punish any use of fabrials, preventing communication via spanreed. Elhokar, Kaladin, Adolin and Shallan were sent by Dalinar to infiltrate the city and save Aesudan and Gavinor Kholin. They talked with Adolin's tailor Yokska, who explained what happened in the city in the intervening time. Aesudan had the Palace Guard retreat into the palace and the City watch to barricade into their barracks. At some point during the riots, the queen send out proclamations declaring all parshmen to be Voidbringers and ordered their execution. When a group of lighteyes went to the palace to challenge the queen, they never came back.[10]

When Elhokar finally got into the palace and spoke with her, she claimed that Pai the Ardent tried to overthrow her, that her Queen's Guard were all Knights Radiant, and that she had figured out how to bond spren. They learned that she was under the influence of the Unmade Yelig-nar and Ashertmarn.[11] It is unclear if Aesudan survived consuming Yelig-nar,[12] although, the Unmade later found its way to Thaylen City and was used by Amaram.[12]

This article is still missing information. Please help The Coppermind by expanding it.
Retrieved from "https://coppermind.net/wiki/?title=Aesudan_Kholin&oldid=177099"
Categories: